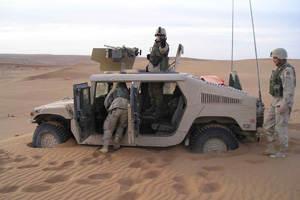 First things first: did Obama mention the surge in tonight’s speech? Huh huh, did he? No he didn’t. Gretchen Carlson is going to go ballistic. (Again.)

OK then. Glad we got that cleared up. What else? Well, I was struck by his mention of his call with George Bush earlier today. The White House obviously played up this call before the fact, and I assume that Obama was hoping to get some kind of bipartisan mileage out of it. But in the end, all he said about it was this: “No one could doubt President Bush’s support for our troops, or his love of country and commitment to our security.” I can’t help but think that if this is the most he could say, the phone call must have been a bit of a bust.

I was also struck by what he said about the success of the troop drawdown: “This was my pledge to the American people as a candidate for this office. Last February, I announced a plan that would bring our combat brigades out of Iraq, while redoubling our efforts to strengthen Iraq’s Security Forces and support its government and people. That is what we have done.” This is, technically, true, but it ignores the fact that Obama’s plan was a fairly modest variation on the Status of Forces Agreement negotiated by Bush in late 2008. But why ignore that? If you’re looking for some kind of conciliatory message to conservatives without going as far as congratulating George Bush for the surge, why not mention this? “It is time to turn the page,” Obama said, and framing his withdrawal as a continuation of Bush’s policy seems like it would have been a good way to help that happen.

Beyond that, the most striking part of the speech was more in Obama’s attitude than in his words —though it was in his words too. It was, I thought, crystal clear that Obama still thinks the Iraq war was a dumb war; that he fully intends to keep drawing down forces there; that he fully intends to draw down forces in Afghanistan on schedule; and that going forward he has no intention of projecting further American force abroad if he can possibly help it. That all seemed pretty palpable from the way he talked about both the Iraq war (which he credited with no positive purpose at all) and the Afghanistan war (where he did acknowledge a purpose, but proposed only tightly limited goals with an emphasis on withdrawal starting next year). And then this:

Our nation’s strength and influence abroad must be firmly anchored in our prosperity at home. And the bedrock of that prosperity must be a growing middle class.

Unfortunately, over the last decade, we have not done what is necessary to shore up the foundation of our own prosperity. We have spent over a trillion dollars at war, often financed by borrowing from overseas. This, in turn, has short-changed investments in our own people, and contributed to record deficits. For too long, we have put off tough decisions on everything from our manufacturing base to our energy policy to education reform. As a result, too many middle class families find themselves working harder for less, while our nation’s long-term competitiveness is put at risk.

And so at this moment, as we wind down the war in Iraq, we must tackle those challenges at home with as much energy, and grit, and sense of common purpose as our men and women in uniform who have served abroad. 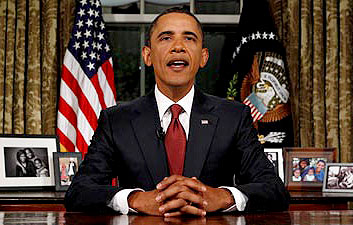 Those are the words of a man who wants to stop spending blood and treasure on war and start spending it at home. I would have appreciated hearing a little bit of detail to back this up — just a little! — but no dice. I suspect that would have inevitably taken him into partisan territory, and he was obviously avoiding that, as he usually does. His comment that “over the last decade we have not done what is necessary to shore up the foundation of our own prosperity” was about the closest he got to any kind of partisan shot taking.

In the end, then, a perfectly good speech. The final few minutes didn’t do much for me, but these kinds of valedictories rarely do. It probably worked better for other viewers. And while conservatives obviously won’t like the fact that Obama is so plainly non-thrilled with the exercise of military power, I liked it just fine. And I thought Obama also struck a good overall tone: composed and deliberate, not bombastic or triumphant. We go to war when we have to, but it really is a last resort. I feel more confident about the ultimate withdrawal of troops from both Iraq and Afghanistan now than I did yesterday, and that’s a message I really wanted to hear.