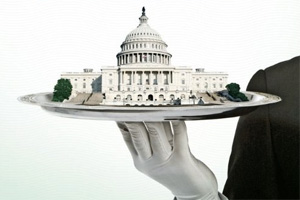 Why has income inequality grown so explosively over the past 30 years? Why do so many working and middle class voters cast their ballots for a party that’s so obviously a captive of corporations and the rich? Why is there no longer any real sustained effort to improve the lot of the middle class?

There’s no shortage of answers. There’s the “What’s the Matter With Kansas” theory. There’s the demise of labor unions. There’s the well-worn story of the rise of conservative think tanks. There’s the impact of globalization on unskilled and semi-skilled labor. There’s the growing returns to education in a world that grows more complex every year.

But these are all limited and therefore unsatisfactory explanations, and no one has yet put them all together into a single organic whole that feels genuinely complete and compelling. Until now. The book that finally does it is called Winner-Take-All Politics, by Jacob Hacker and Paul Pierson, and it puts together all of these pieces with a clarity of explanation that’s breathtaking. I hesitate to summarize their argument for fear of ruining it, but here’s the nickel version:

The result is exactly what you’d expect. With liberal money and energy focused mostly on non-economic concerns, the country moves steadily leftward on social issues. With conservative money and energy focused mostly on the interests of corporations and the rich—and with no one really fighting back—the country moves steadily rightward on econonomic issues. Thomas Frank’s famous working-class Kansans who vote against their own economic interests are easily explained. It’s not just that conservatives appeal to them on social grounds, it’s that there’s no one left to really make the economic case to them in the first place. And even if anyone did, they have little reason to believe that Democrats would actually follow through in concrete ways. So why not vote on abortion and gay rights instead?

I’m not doing Pierson and Hacker justice here. In fact, I’m not really even trying to. What I am doing is telling you to buy a copy of their book and read it. Seriously. Just get a copy and read at least Parts I and II. No book is perfect, and I feel a little silly gushing too much, but this is the most complete and sustained explanation I’ve ever read of why, over the past 30 years, America has gone the direction it has even while most other countries haven’t. And although Hacker and Pierson’s sympathies are obvious, this isn’t a polemic. It’s an explanation. For me, it was a 300-page “Aha!” moment.

More later. In the meantime, though, buy the book. I can almost guarantee you won’t be disappointed.