Although Ezra Klein likes the idea behind the all-electric Nissan Leaf, it’s not for him:

But the Nissan Leaf wouldn’t work for me at all, as I don’t own a garage, and D.C’s streets aren’t outfitted with charging stations. Which gets to the difficulty these new technologies will have: We’ve sunk an enormous amount of money into the infrastructure that makes cars that run on refined oil products convenient to use as our primary modes of transportation.

….This is why pricing carbon always made sense: There’s so much money and habit and infrastructure and culture working on behalf of the energy status quo right now, while the alternatives don’t even 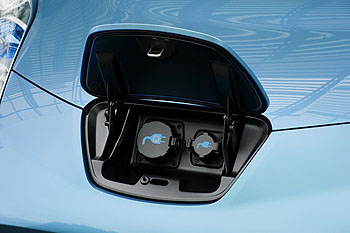 get to see their advantages — low carbon emissions — reflected in their price.

I agree with all of this. Still, there’s a disconnect here. On narrow grounds, the Leaf very much has its carbon footprint reflected in its price because it qualifies for a $7,000 federal subsidy. That’s far more of a relative pricing advantage than it would get from any plausible carbon tax, which would probably add no more than 50 cents a gallon to the price of gasoline. On broader grounds, keep in mind that no car is designed to appeal to everyone. If Nissan sells a million copies of the Leaf they’ll be ecstatic — and there are way more than a million people in America who do have garages and drive less than 100 miles per day. Once they start buying Leafs (Leaves?) and Chevy Volts and other electric cars, charging stations will start to appear the same way that gas stations slowly started to appear in the 1910s. That will increase the market for electric cars, which in turn will increase the demand for charging stations, rinse and repeat. Five years from now, maybe the Washington Post’s parking garage will have charging stations available and Ezra will be able to buy a Leaf and charge it every day at work.

There’s no question that carbon pricing would help all this along, but it’s best to think of it as more of a tailwind than anything else. Electric cars will succeed or fail mostly based on other things, and they can succeed even without a carbon tax. But they — along with lots of other light carbon footprint technologies — would suceed a little bit faster if we had one.