OK, so why does everyone think the deficit is out of control and a threat to the existence of the republic? Good question. It’s probably way too late to pull us out of the rabbit hole we’ve collectively dived into, but anyone reporting on this really owes it to their readers to explain the basic political dynamics at work. So why do Republicans and Democrats both think the deficit is a problem?

Answer for Republicans: They don’t think the deficit is a problem. If they did, they’d favor tax increases, Pentagon cuts, and Medicare cuts, since even the most dimwitted among them knows that cutting domestic discretionary spending won’t make a dent in the deficit. But they favor none of these things.

Rather, they think federal spending on liberal social programs is a problem, and yammering about the deficit is a good way to force cuts to these programs. And there’s nothing wrong with this. It’s good politics. Why waste a crisis, after all? But anyone reporting on this issue really needs to be honest about what’s going on. Republicans want to cut social spending. The deficit is just a handy cudgel to make this happen.

Answer for Democrats: I’m actually a little stumped here. I think most Democrats understand that the short-term deficit really isn’t a problem, and they also understand (I hope) that allowing the Bush tax cuts to expire and letting the economy recover will get us very close to eliminating the primary deficit (i.e., the deficit minus interest payments). If we do that, then publicly 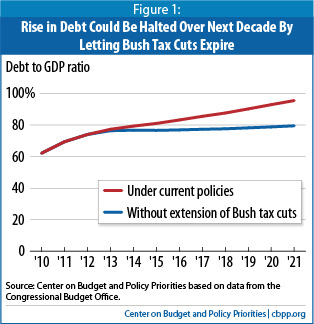 held debt as a percent of GDP stabilizes and the deficit problem becomes pretty manageable. The chart on the right from CBPP shows this graphically.

So why have Democrats joined the deficit chorus? I’m not sure, really. I’d guess it’s mainly just fear that they’ve been outflanked on the issue, and if they want to stay in office they have to yammer about it. But that’s just a guess.

In any case, Republicans are wrong: we don’t have a spending problem, we have an aging problem. As America ages, Social Security and Medicare are going to cost more, and unless you want to start killing off old people Soylent Green style there’s no way to avoid this even if we do get a handle on rising healthcare costs. This in turn means we’re going to need more revenue to care for the elderly. As Jon Cohn says today, “It’s ridiculous to have a conversation about balancing the budget that won’t even contemplate higher taxes.”

A perpetually growing deficit will eventually drive up interest rates and slow economic growth, so it’s something we should take seriously. But slashing social programs is exactly the opposite of taking it seriously. We need to let the Bush tax cuts expire, get out of Iraq and Afghanistan, keep working hard on reining in healthcare costs, and accept the fact that we’re going to need to fund an aging population whether we like it or not. Do that, and all we’ll need is modest discipline in the rest of the budget. The long-term deficit is a problem, but it’s not a crisis.