Via Jon Chait, who’s dubious about this since no one else breathed a word of it, here is Elizabeth Drew in the New York Review of Books claiming that underneath all the trash talk, 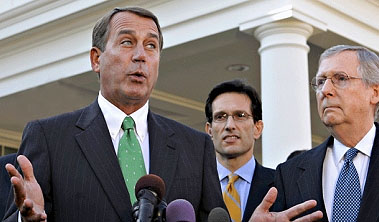 Obama and the Republican leadership have already agreed to hammer out a bipartisan budget deal:

But despite all the confrontational rhetoric between the two parties about budget priorities, the White House and Republican congressional leaders, in private talks, have agreed on the need to try to reach a bipartisan “grand bargain” over the budget—a sweeping deal that could include entitlements and tax reforms as well as budget reduction. A Senate Republican leadership aide confirmed this, saying, “In fact, for anything to happen, it will require such a White House/congressional leadership bargain.” The preferred idea is that, just as they did late last year on the tax bill, they would reach an agreement and then unveil it to the public.

At the same time, a bipartisan group of leading senators have met in an effort to cut the deficit—which could become a part of the debt-reduction puzzle. The thinking is that the Tea Party allies might be brought along in the end, because their primary goal is to reduce the deficit. The details will be difficult, but a surprising sort of deficit-cutting fever has broken out on Capitol Hill, fueled in part by a fear that at some point the bond markets and foreign lenders will call in their loans, setting off a disastrous financial crisis. Right now, there’s a game of chicken going on over who will offer their proposals first, but this should be resolvable.

Another reason this is happening is that despite their occasional deference to Tea party demands, the Republican congressional leaders, Mitch McConnell, John Boehner, and Eric Cantor, are also realists. They may try to drive a hard bargain on the budget but they know that the issue must be resolved. Despite the baying of some Tea Party allies that the government should be shut down if the administration doesn’t offer enough concessions, these leaders understand that that would be a disastrous course for the Republicans—as it was when Newt Gingrich tried it in 1995.

Well, maybe. There’s no telling who Drew’s original source is for this, and her confirming source (a “Senate Republican leadership aide”) isn’t all that impressive. What’s more, it ain’t the case that the tea party movement’s “primary goal” is reducing the deficit. Its primary goal is to reduce taxes and its secondary goal is to lift the intolerable burden of tyranny that Barack Obama has imposed on us. (Its tertiary goal is whatever bee happens to be up Glenn Beck’s bonnet the week you ask them.) As for foreign lenders “calling in their loans,” it’s hard to parse what that’s even supposed to mean.

So….I’m not sure about this. A “grand bargain” would, almost by definition, include tax increases, and my guess is that the GOP leadership’s realism extends about as far as understanding that supporting a tax increase would pretty much spell the end of their political careers. Drew’s report is interesting, but like Jon, I’ll believe it when there’s more than one reporter in all of Washington DC who’s heard about this.