Walker is proposing expanding the voucher program that currently is only available to low-income students in Milwaukee. He wants to expand the program to all of Milwaukee County and phase out the low-income qualifying ceiling. He also wants to do away with a requirement that voucher students take the same statewide achievement tests as students in public schools. 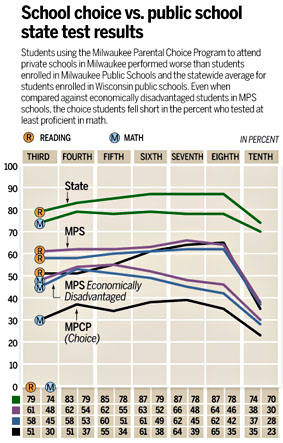 Students in Milwaukee’s school choice program performed worse than or about the same as students in Milwaukee Public Schools in math and reading on the latest statewide test, according to results released Tuesday that provided the first apples-to-apples achievement comparison between public and individual voucher schools.

Unfortunately for voucher fans, when kids all take the same test it’s way too obvious that voucher schools don’t really outperform traditional schools. Nor do they outperform schools in poor neighborhoods (that’s the blue line in the chart). At best, they perform about the same, and at worst they perform more poorly. Not only does this undermine the case for vouchers, but it also undermines the case that, for example, it’s the troglodyte teachers unions that are holding back Wisconsin’s kids. That can hardly be tolerated, so the best bet is to simply not allow comparisons to be made in the first place.

On an unrelated note, this chart is a good example of the great middle school collapse that bedevils education reform. As you can see, test scores are mostly stable all the way through elementary school and, in some case, through eighth grade. Then they crash. By tenth grade, whatever gains they’ve made in previous grades are largely gone, and that’s especially true in the urban Milwaukee district. Until we figure out what’s going on here, ed reform is going to continue to founder. It’s nice to have lots of high-performing sixth-graders, but the only thing that really matters is how these kids turn out in the end. So far, the answer is: not so hot.