Brad Friedman has obtained an audio recording of a seminar held by the
Koch brothers
earlier this year near Vail, Colorado, and today we’ve got a piece about the seminar up on our site. Here’s how it starts:

“We have Saddam Hussein,” declared billionaire industrialist Charles Koch, apparently referring to President Barack Obama as he welcomed hundreds of wealthy guests to the latest of the secret fundraising and 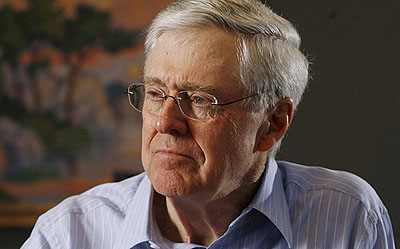 strategy seminars he and his brother host twice a year. The 2012 elections, he warned, will be “the mother of all wars.”

This has prompted a lot of people to insist that Koch compared Obama to Saddam Hussein. And maybe he did. But here’s the whole passage:

But we’ve been talking about — we have Saddam Hussein, this is the Mother of All Wars we’ve got in the next 18 months. For the life or death of this country. So, I’m not going to do this to put any pressure on anyone here, mind you. This is not pressure. But if this makes your heart feel glad and you want to be more forthcoming, then so be it.

I don’t know this for sure, any more than anyone else knows what that stray fragment meant. Koch obviously had some kind of quip in mind, but never managed to actually deliver it. But suggesting that he meant to compare Obama to Saddam Hussein is a stretch. At the very least, there’s at least one other quite plausible interpretation.