This comes via Felix Salmon, but I edited his chart to create a different one. Roughly speaking, mine shows total corporate income tax paid as a percent of pretax profit, and as you can see, it’s been on a pretty steady downward trend for a long time, from around 50% in 1950 to 20% today. But of course, this is just an aggregate number. As Felix says, “What we don’t know — because they won’t say, and no one’s forcing them to say — is how much any given public company pays.” And you can hardly blame them, since the tax rate for lots of big companies would be so laughably small that no one would ever take them seriously again when they complained about America’s terribly burdensome tax system.

None of this is to say that we shouldn’t reform the corporate tax code. We should. Intead of a high basic rate with lots of exemptions, we should have a somewhat lower rate with fewer exemptions. And we probably ought to adopt a territorial system while we’re at it. Or, alternatively, we could just ditch corporate taxation entirely and replace it with something else that has a similar or more progressive incidence.

But whatever we do, don’t ever fall for the complaint that corporate tax rates in the U.S. are high. They aren’t. (See Table 1 here.) American taxes are complex, but they aren’t especially high. 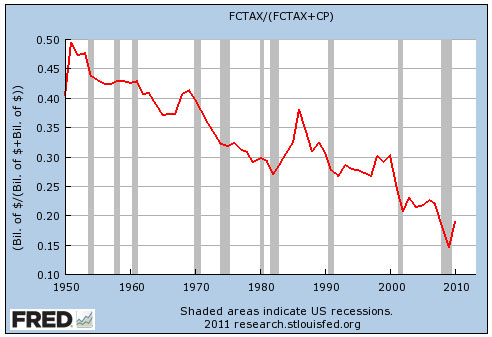