Via Nate Silver, who’s making a point about political polling, I came across the CDC’s latest estimate of the number of homes that rely solely on wireless phones. There’s no real surprise here, it’s just that I haven’t been paying attention to this for the past several years. So my vague memory is that about 20% of homes have no landline phones, but that number has continued to rise and is now just a bit under 40%. The chart below, with my own extrapolation to September 2012, shows the trend.

I’ve now owned a cell phone for 14 years, and I have yet to hold a conversation with either party on a cell phone that didn’t suck. The sound quality is bad, the delay is bad, the voice activation that continually cuts off tiny bits of conversation is bad, and the general level of background static is bad. And that’s on basically solid connections. When you’re on a weak connection, you might as well be talking on tin cans. It doesn’t surprise me in the least that young people, who have grown up with this, don’t like to talk on phones much. I hate talking to people on cell phones too. 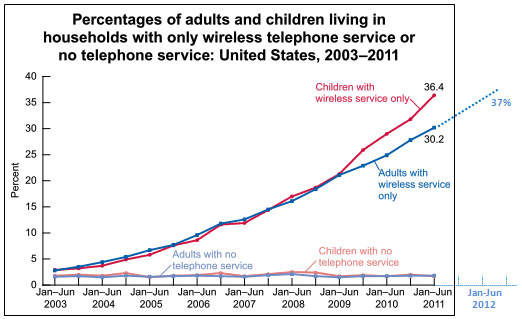