Here’s the latest from Jonathan Haidt of “moral foundations” fame. He was part of a team that asked about 2,000 people to rate how they felt a “typical” liberal or conservative integrated five moral dimensions into their worldview. There are real differences: “Liberals endorse the individual-focused moral concerns of compassion and fairness more than conservatives do, and conservatives endorse the group-focused moral concerns of ingroup loyalty, respect for authorities and traditions, and physical/spiritual purity more than liberals do.”

That’s reality, but what do people think? Answer: they substantially exaggerate the moral differences between liberals and conservatives. In fact, they exaggerate the extremity of moral concerns for both their own group and the other group. And there’s bad news for us lefties: as the chart 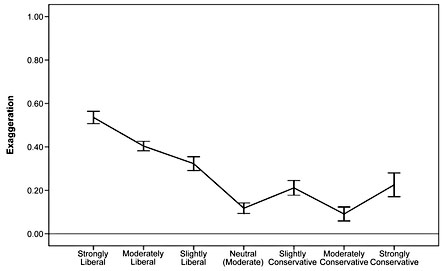 on the right shows, we were the biggest exaggerators. Apparently conservatives know us better than we know them.

You may leave other possibilities in comments.