Getting back to the chart, we see that spending for every single government program going forward is remarkably stable as a percentage of GDP. Those who complain loudest about spending and deficits nearly always base their concerns on projections of nominal spending that are unadjusted for inflation, growth of the population or growth of the economy. This is intellectually dishonest.

In fact, virtually all the growth in projected spending comes not from entitlements or giveaways to the poor and lazy, as Republicans would have us believe, but rather from interest on the debt.

And here’s the chart: 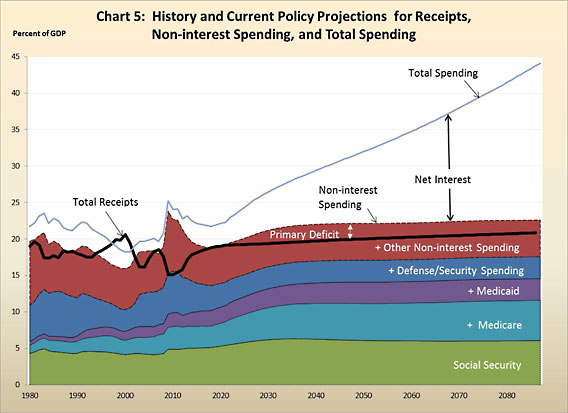 Bruce is basically right, but I want to point out another way of looking at this. Suppose we raise taxes in order to flatten out interest spending. What are we left with a decade or two from now? Answer: federal spending at roughly 23 percent of GDP.

On a chart with a long timeline, that looks pretty flat. But in fact, this is what all the shouting is about. Should federal spending be limited to around 19 percent of GDP—Paul Ryan’s preferred goal—or should we accept the fact that society is aging and we’re eventually going to need to spend 23 percent of GDP whether we like it or not? I think the latter makes a lot more sense, but we all need to understand that this really is what the argument is about. An additional four or five percent of GDP won’t bankrupt us, but it’s not chickenfeed either. If that’s the spending trajectory we want, we need to persuade the public that it’s necessary, not pretend that it doesn’t exist.