I got an email this morning from a friend who, while agreeing that Obama’s low schmoozability isn’t really keeping anything from getting done in Washington DC, is still a bit concerned that Obama might be taking things too far. After all, if he’s given up completely on having a decent relationship with the opposition, that might still have an effect on the margin.

At a first pass, that sounds unarguable. Other things being equal, friendly relationships certainly can’t hurt, can they?

Actually, they can. The problem, I think, is in the opportunity cost. In the past, it was possible (according to legend, at least) for politicians to rip each other bloody in public and then head out for a beer afterward to laugh about it. But even if that’s true, it’s an era that’s long gone—and not just in the White House. For better or worse, politicians of opposing parties just don’t socialize much anymore.

So here’s Obama’s problem. He can continue to try to make nice with Republicans, figuring that even if it does no good, it probably does no harm either. But if he does that, he has to be reasonably friendly in public too. And that might carry 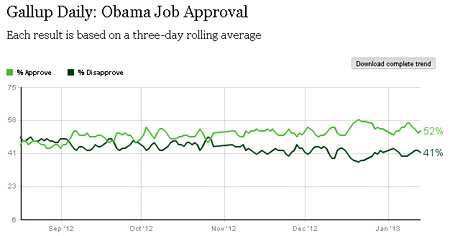 a cost. It means he’s given up one possible way of moving public opinion in his direction.

So in his second term, he seems to be making a different calculation. If trying to compromise gets you nowhere, maybe a more direct appeal to the American public will. And that means attacking Republican intransigence more directly. It’s no sure thing this will work, of course, but it’s worth a try given his utter failure to move Republicans even a smidgen during his first term. And guess what? He seems to have gotten a decent fiscal cliff deal out of it. He’s starting to generate a bit of Republican nervousness toward using the debt ceiling as an opportunity for hostage taking. And his favorability ratings continue to creep upward. Being the bad cop doesn’t seem to be doing any harm.

Political scientists will tell you this can’t work because presidents don’t really have much power to move public opinion. Maybe. But Obama seems to think it’s worth a try, and I find it hard to disagree. One way or another, the tea party faction of the Republican Party has to be held accountable for its zealotry. Maybe a little plain talk is the best way to do that. And maybe Beltway sensibilities need to toughen up a bit.