I seem to have unleashed a mini-storm of incredulity yesterday by mentioning that I drive a Porsche. Here’s a typical email from a longtime reader:

You read a guy for ten years and you think you know him, and I would have never guessed that you drive a Porsche. You can preserve my construct of your personality if you tell me it was bequeathed to you by an uncle you’d never met.

Nope. I don’t even have any uncles. The real story is that we all have at least a few vices, and mine is that I’m sort of a C-list car guy. I don’t inhale car magazines or anything like that, but I like cars, I like reading about them, and I like driving lively little sports cars. The first car I owned after the VW Beetle I drove in college was a Mazda RX-7. That was a great car! Rear-wheel drive, nice handling, beautiful clutch, crisp shifter, and the rotary engine had a great torque curve. It wasn’t all that fast, but fast is overrated. It was fast enough to be fun. And cheap, too: I got mine for under $10,000, and it lasted a dozen years without a single major problem.

I remember shopping around for a new car in the mid-90s and not finding anything I liked. I was mostly intrigued by the BMW Z-3, but the roofline was just a hair too low. My head brushed the roof of the RX-7 in the morning (but not in the evening thanks to ten hours of spinal compression), and the roof of the Z-3 was maybe half an inch lower than that. I tried for a while to convince myself that it wasn’t that bad, but eventually I gave up. Ditto for the 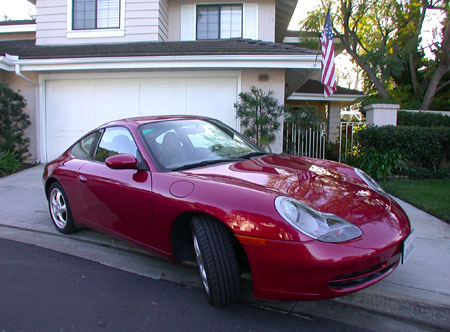 newer RX-7, which was hopelessly too small. Eventually, after driving lots of cars, I finally compromised on a Honda Prelude. It was a perfectly fine car, but I never really bonded with it. No personality.

So where did the Porsche come from? Well, I used to make more money than I do now, and in the late 90s the startup company I worked for did an IPO, and then a couple of years later got acquired. I made a chunk of money from all that, and thought that maybe I’d go take a look at a Porsche Boxster. One thing led to another, though, and I ended up in a 911 instead. Why? It’s been my favorite car forever, it wasn’t really that much more expensive than the Boxster, and the roofline is wonderfully high. That’s it on the right, back when it was shiny and new. It’s still pretty shiny, actually, thanks to low mileage, the wonders of modern paint jobs, and keeping it in a garage.

I don’t regret buying it, and it still runs fine. But this is really sort of a farewell post, because it’s now twelve years old and it’s about time to replace it. Sadly, it’s also the end of the line for sports cars for me: my future car will be a cheap little hatchback, something that’s a wee bit more practical and gets good mileage. Right now the leading candidate is a Mazda 3, because I want a stick shift and Mazda still seems to make about the best manual transmission out there.

In other words, very soon my friend’s construct of my personality will be 100 percent accurate. Funny how that works out.