Howard Schneider sums up some recent research from the IMF:

It’s official. The United States is a “profligate” nation, according to IMF staff research that examines which countries respond to increases in public debt by trimming their fiscal sails. And that makes the nation surprisingly rare in the developed world….In theory, a “prudent” nation would trim deficits or accumulate surpluses as overall debt grows, while a profligate one would not….By this methodology, the United States is one of only a few profligate countries in the developed world, where even big social-welfare states like Denmark earned a “prudent” label for overall fiscal management. The Danes may spend a lot on social protection. But they collect the taxes to pay for it.

However, there’s an asterisk here, and it’s a pretty big one. From the paper:

In the case of the United States from 1950-2011, this procedure finds that dropping the years 2008-2011 is sufficient to return to a positive and significant slope coefficient.

In other words, generally speaking the United States is a prudent nation, cutting its spending when its public debt gets large. However, our response to the 2008 financial crisis was large enough to turn a fairly large prudence score into a modestly-sized profligate score. In fact, between 1950-2007, the United States was one of the most prudent countries in the authors’ database.

This is actually sort of reassuring. It means that during relatively normal times, the United States tends to manage its finances fairly well. But during a massive recession marked by skyrocketing unemployment and a liquidity trap, we were willing to pull out the stops and spend money regardless of its effect on the debt. We might not have done this as much as we should have, or for as long as we should have, but at least we did it. 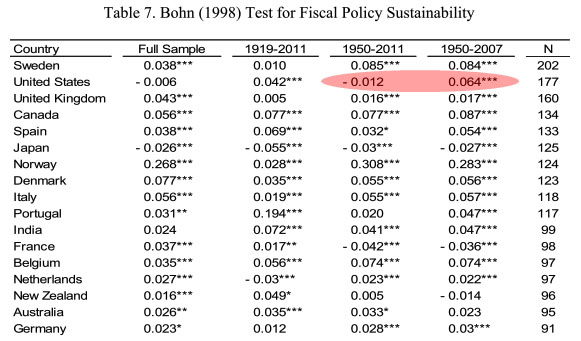