The growth rate of healthcare spending, which once seemed to be putting us on a path to national bankruptcy, seems to be abating pretty seriously lately. Jon Chait comments:

The general conservative response to date has involved ignoring the trend, or perhaps dismissing it as a temporary, recession-induced dip likely to reverse itself. Yesterday, the Wall Street Journal editorial page offered up what may be the new conservative fallback position: Okay, health-care costs are slowing down, but it has absolutely nothing to do with the huge new health-care reform law. “It increasingly looks as if ObamaCare passed amid a national correction in the health markets,” the Journal now asserts, “that no one in Congress or the White House understood.” It’s another one of those huge, crazy coincidences!

My take is a little different: I think the Journal is wrong to suggest that we’re merely in the middle of a temporary correction, and Chait is wrong to imply that Obamacare has played a role in the slowdown of healthcare spending. Take a look at the chart below, which is a home-brewed version of one that’s cropped up in a lot of places recently. I took the CMS figures for per-capita national healthcare consumption expenditures and compared its year-over-year growth rate with the inflation rate. A high number means healthcare spending is growing faster than inflation. The chart is noisy, but the pattern is pretty clear: the growth rate of healthcare spending has been on a pretty steady downward trend for three decades. If it keeps following the current trendline, per-capita healthcare spending will be growing at the same rate as general inflation by around 2020 or so: 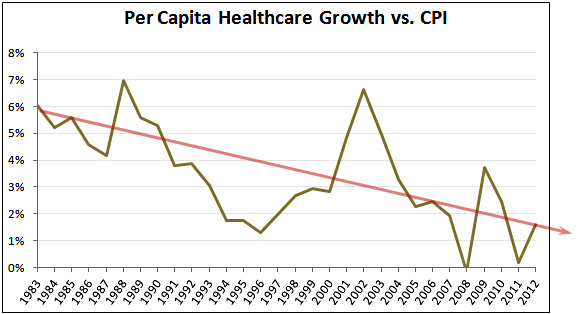 For a more rigorous look at this over just the past decade, check out “When the Cost Curve Bent,” described here by Sarah Kliff. Standard caveats apply: the trendline might not keep going down; more people will still mean higher healthcare spending; and recent data might be artificially depressed by the recession and the sluggish recovery.

Bottom line: I think the moderation of healthcare spending growth has been going on for quite a while. And while Obamacare may very well accelerate this trend, it’s too early to say it’s had any effect yet. At the same time, Chait’s more general mockery of the Journal’s about-face on this subject is fully merited:

Of course, it’s not just that the Journal didn’t predict the health-care cost slowdown. The Journal insisted it couldn’t possibly happen. Indeed, it insisted that Obamacare would destroy — was already destroying — any possible hope for a health-care cost correction, and would instead necessarily lead to a massive increase in health-care inflation.

That’s been the party line on the right all along. Along with hyperinflation and spiraling interest rates, I think we can put this squarely in the basket of stuff they just don’t get.