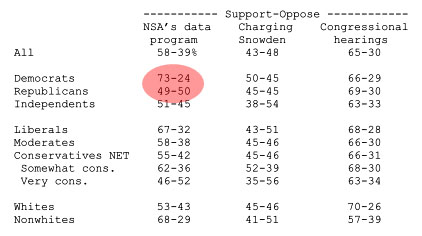 Here’s the latest polling on the NSA surveillance program:

Most Americans in a new ABC News/Washington Post poll support telephone and internet surveillance by the National Security Administration, but two-thirds also favor congressional hearings on the subject — indicating broad interest in more information about these activities.

The public by 58-39 percent supports the NSA collecting “extensive records of phone calls, as well as internet data related to specific investigations, to try to identify possible terrorist threats.” Support for the program is far higher among Democrats and liberals than among Republicans and strong conservatives, reversing Bush-era political divisions on issues of privacy vs. security.

It’s now been two weeks since the original Guardian story, and several recent polls have produced similar results. For now, then, I think we can say that we have a pretty good idea of what the public thinks. They favor surveillance by about a 2:1 margin, and now that Obama is president that margin is much higher among Democrats than Republicans.

On interesting tidbit about this: on most issues these days, opinion among independents is closer to Democrats than to Republicans. On this one, just the opposite is true: Independents are aligned almost perfectly with the newly Foxified and skeptical Republicans. Politically speaking, this should be unsettling news for Democrats.