Via Brad Plumer, a new report from the Department of Energy says that climate change is likely to have a severe impact on our ability to produce and distribute electricity:

Increasing temperatures, decreasing water availability, more intense storm events, and sea level rise will each independently, and in some cases in combination, affect the ability of the United States to produce and transmit electricity from fossil, nuclear, and existing and emerging renewable energy sources. These changes are also projected to affect the nation’s demand for energy and its ability to access, produce, and distribute oil and natural gas.

Why? Because power plants need cooling water that’s actually cool. Coastal plants are vulnerable to flooding. Droughts cut off the massive water supplies needed for natural gas fracking. Hydropower dwindles when reservoir levels drop. Electric grids are less efficient when temperatures are higher. Fuel transport can be halted by floods and droughts. And all this, of course, comes against the backdrop of increasing demand for electricity to power air conditioners thanks to….climate change.

A few examples from the report about the effects of drought are below. Other chapters cover the consequences of increasing temperatures and sea level rise. 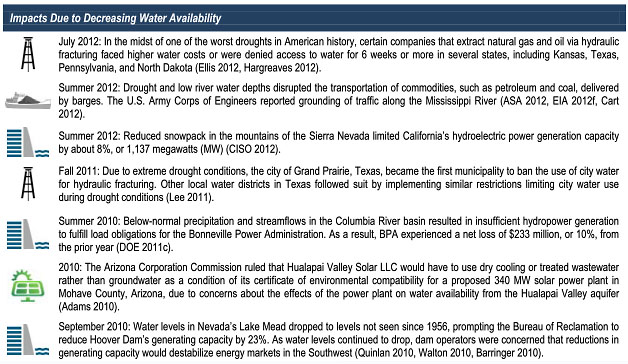