Here’s the expected state of play on the budget: Today the House will vote for a Continuing Resolution that includes a defunding of Obamacare. It will go to the Senate, which will strip out the Obamacare language and send it back to the House. Republicans in the House are then in a world of hurt: thanks to rebellion in their own ranks, they don’t have the votes to pass either a clean CR or anything else. This means John Boehner 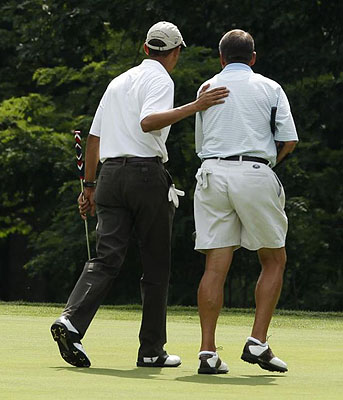 will be left twisting in the wind for a good long time as the government is shut down and the public gets angrier and angrier at Republican lunacy.

At least, that’s the conventional wisdom about where we’re headed, says Noam Scheiber:

Or at least it was where we were headed until yesterday, when the White House tipped its hand. According to Politico, the White House is hoping to persuade (or hoping Nancy Pelosi can persuade) 40-50 Democrats to vote for a clean CR if it comes before the House to ensure that it passes. To put it slightly differently: The White House believes Boehner won’t be able to pass the clean CR with House Republican votes alone, thereby putting him on track for the political disaster of a shutdown. In order to avoid this fate, the White House will urge Democrats to provide the margin of passage. (A White House aide tells me the Politico account is a bit overstated—there’s nothing being urged just yet, and certainly no directives issued to Pelosi. But the aide doesn’t deny that this would be the preferred approach should the situation arise. My understanding is that House Democrats, for their part, are more inclined to let the GOP hang itself, or at least demand a higher level of spending in exchange for their votes.)

Scheiber thinks this is crazy. Why help out Boehner? Why not let the tea partiers get a shutdown out of their system now, instead of pushing them into even more of a frenzy for a shutdown when the debt ceiling is reached?

I think part of the answer comes from a continued misreading of Obama. Sure, his official budget calls for spending at higher levels than the sequester, but that’s for show. All of his previous actions suggest that Obama is actually OK with the sequester. He’s not in love with it or anything, but he’s basically OK with lower spending levels and lower deficits. He’d choose a different method if he could, but the sequester has the virtue of lowering the deficit in a way he can blame on Republicans, thus assuaging his own base. So he’ll accept it if he has to.

Given that, it’s no surprise that he’ll save Boehner’s bacon if he can. He gets lower spending that he’s basically OK with. He gets to maintain his persona as the adult in the room. And Boehner ends up owing him a favor.

Does this mean that tea partiers will be even more frenzied about shutting down the government over the debt ceiling since they didn’t get to nuke the government over the budget? Probably. But I suspect that the Republican leadership is less willing to play games over the debt ceiling. They really do understand how dangerous this is. The posturing will last right up to the 11th hour, but in the end I think everyone will blink. They just aren’t willing to wreck America’s standing as an honest creditor and tank financial markets in the process. With a bit of minor face-saving attached (perhaps approval of the Keystone XL pipeline, which I suspect Obama secretly doesn’t mind too much), it’s possible that the debt ceiling may get raised without too much drama too.

Of course, this all depends on Boehner being able to get even 180 Republicans to vote for a clean CR, which will almost certainly require the support of Eric Cantor. Whether Cantor goes along is a bit of a wild card. Stay tuned.