The Daily Show did a segment last night propagating the meme that anti-vaccine hysteria is mostly a pathology of the granola-crunching, hippie-dippie left. However, just in case anyone cares about the actual truth,1 here’s 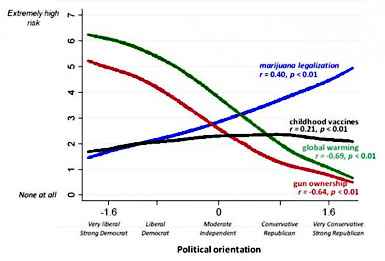 the truth: anti-vaccine lunacy has no special ideological valence. Liberals and conservatives share it in approximately equal numbers.

The basic chart is on the right. The black line represents how risky various groups think vaccines are, and it’s pretty flat: it starts at around 1.8 among the very liberal and ends at about 2.0 for the very conservative. That’s as bipartisan as it gets. I suppose it’s possible that if you broke out the tiny minority who think vaccines are extremely risky, you might find more hippie-dippie lefties than gun-toting righties. I don’t know. But it’s a minuscule fringe belief in any case: Fewer than 1 percent of parents refuse to allow their children to receive any vaccines at all.

1A quaint notion, to be sure.