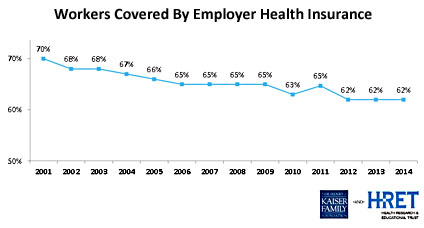 The share of the population with employer health insurance has been slowly eroding for years. The chart on the right tells the story: total coverage rates have dropped from 70 percent to 62 percent since 2001. The trend is pretty clear: the number of workers covered by employer insurance has been dropping about half a percentage point per year for more than a decade.

So has Obamacare accelerated this trend? There have long been fears that it might: once the exchanges were up and running, employers might decide that it was cheaper to ditch their own insurance and just pay their workers extra to buy coverage on the open market. But a new study released by Health Affairs says that hasn’t happened: 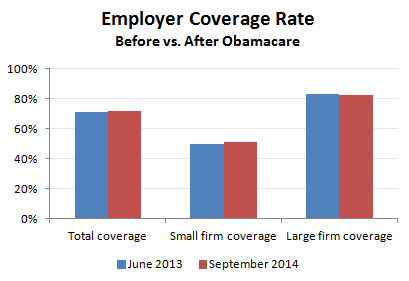 firms. The rates also remained constant among low- and high-income workers in either small or large firms.

Note that the percentages themselves differ between the Kaiser numbers and the study numbers thanks to differences in methodology. And there are, of course, plenty of reasons we might see only small changes in employer coverage. The economy has improved. Inertia might be keeping things in check for a while. Perhaps as Obamacare becomes settled law and its benefits become more widely known, more employers will drop their own coverage.

Those are all possibilities. For now, though, it looks as though fears of employers dumping health coverage were unfounded. It’s yet more good news for Obamacare.