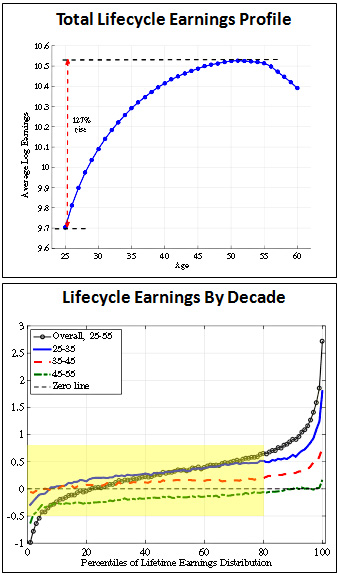 By age 40 you’re done. That’s the conclusion of a report from the New York Fed that looks at lifetime earnings from age 25 through retirement. The charts on the right tell the story.

The top chart shows average earnings by age. It’s a little hard to immediately see how dramatic the income peak is since the y-axis shows the log of earnings, but if you do the arithmetic it demonstrates that, on average, by age 40 you’re within about $1,000 of your peak earnings. You’ll get inflation adjustments after that, but for the bulk of us, that’s it. Real earnings pretty much plateau after age 40.

Now, outside the yellow box we have the top 20 percent: the well off and the rich. Those folks show a lot of earnings growth when they’re young, but they also show fairly healthy growth between ages 35-45.

And the top 1 percent? That’s on the very far right, and as you can see, they show earnings growth at every age level.

None of this will come as much of a surprise to anyone, but I thought it was interesting to see it in black and white, so to speak. If you’re planning to make your fortune, you’d better do it by age 40. With only a few exceptions—and those exceptions are mostly for people already making a lot of money—you’re done by then. Your income just isn’t likely to ever go up much after that.