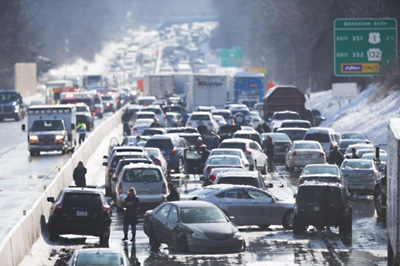 Emily Badger passes along news of a group trying to get us all to stop talking about traffic “accidents”:

An “accident” is, by definition, unintentional. We accidentally drop dinner plates, or send e-mails before we’re done writing them. The word also suggests something of the unforeseen — an event that couldn’t have been anticipated, for which no one can be blamed. That second connotation is what irks transportation advocates who want to change how we talk about traffic collisions. When one vehicle careens into another or rounds a corner into a pedestrian — call it a “crash,” they say, not an “accident.”

“Our children did not die in ‘accidents,'” says Amy Cohen, a co-founder of the New York-based group Families for Safe Streets. Her 12-year-old son was hit and killed by a van on the street in front of their home in 2013. “An ‘accident,'” she says, “implies that nothing could have been done to prevent their deaths.”

I remember this from my driver’s ed class 40 years ago. Our instructor told us endlessly that they were “collisions,” not accidents. But we’re still talking about accidents 40 years later, so apparently this is a tough habit to break.

And the truth is that I didn’t really get it back then. I still don’t. “Accident” doesn’t imply that something is unforeseeable, or that no one can be blamed, or that nothing could possibly have been done to prevent it. Here’s the definition:

noun. an undesirable or unfortunate happening that occurs unintentionally and usually results in harm, injury, damage, or loss; casualty; mishap.

Nearly all “accidents” are foreseeable (lots of people drop dinner dishes); have someone to blame (probably the person who dropped the dishes); and can be prevented (stop carrying the dishes with one hand). The same is true of automobile collisions. Driving while drunk, or texting, or speeding are all things that make accidents more likely. We can work to prevent those things and we can assign blame when accidents happen—and we do.

I have a tendency to use the word “collision” because I was brainwashed 40 years ago, but it’s hard to see that it makes much difference. Here is Caroline Samponaro, deputy director at Transportation Alternatives:

“If we stopped using that word, as individuals, as a city, in a national context, what questions do we have to start asking ourselves about these crashes?” says Caroline Samponaro, deputy director at Transportation Alternatives. How did they happen? Who was to blame? An erratic driver? A faulty vehicle? A perpetually dangerous intersection?

I’m mystified. We already do all that stuff. Collisions are routinely investigated. Fault is determined. The NTSA tracks potential safety problems in vehicles. Municipal traffic departments make changes to intersections. We pass drunk driving laws. We suspend the licenses of dangerous drivers.

So it doesn’t seem to me that use of the word “accident” is either wrong or perilous. If we had a history of ignoring automobile safety because it was common to just shrug and ask “whaddaya gonna do?” you could make a case for this. But we don’t.