Kevin Williamson doesn’t like the new budget deal. That’s no surprise: the reason Boehner is trying to pass this while he’s a lame duck is that he knows no one will like it. But that doesn’t matter to him anymore, so he’s willing to shrug and just get it done.

So what is Williamson’s specific gripe? That the deal basically does away with sequestration:

Sequestration is the reason why in recent years we’ve reduced federal spending substantially in GDP terms, from about 25 percent to about 20 percent. It is the main reason that we have reduced the federal deficit in GDP terms. Democrat-supporting welfare entrepreneurs hated it, and Republican-supporting military contractors hated it. 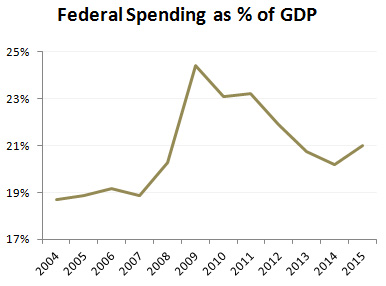 Ordinary Americans did not have much in the way of strong views on the matter, which often is the case when a policy actually does what it is supposed to. Effective government rarely is dramatic government.

No argument with the first sentence. Sequestration was specifically designed to be so unlikable that neither party would ever support it. The fact that it took effect anyway is a testament to the dysfunction of the federal government, not to the budget-capping wonders of sequestration.

But let’s review that last paragraph. Is sequestration really the “main” reason we’ve reduced federal spending from 25 percent of GDP to 20 percent? Hmmm:

Now, I suppose that any kind of spending cut is a good cut to a conservative. But sequestration is responsible for only about a seventh of the spending reduction since 2009. The rest is due to (a) the end of stimulus spending, (b) reduced safety net spending as the recession eased, (c) the 2011 budget deal, and (d) the recovery of GDP growth, which automatically reduces spending as a percent of GDP.