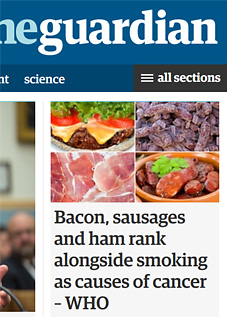 The Guardian wins today’s award for misleading science reporting. “Bacon, sausages and ham rank alongside smoking as causes of cancer,” their headline thunders, and technically that’s true. About as true as saying that my housecats “rank alongside” elephants as large mammals.

In other words, size matters, not just taxonomy. So what does the World Health Organization really say? This is from their handy Q&A:

In other words, the WHO took care to explicitly say that processed meat didn’t rank alongside smoking when it comes to cancer risk.

That’s not nothing. You’re probably better off taking it easy on the spam. Nevertheless, not everything in the category “causes cancer” is created equal. If you’re really worried about cancer, cut out the smoking, the drinking, the overeating, and the city living. Once you’ve done that, then it’s time to decide if you also want to skip the bacon.

1But not hamburger, despite what the Guardian’s photo editor seems to think.