This chart gets filed under things that leave me scratching my head. It’s from a survey published in the latest EBRI newsletter, and it shows how much people value certain kinds of job benefits. Health coverage is #1, unsurprisingly. But the perceived importance of retirement benefits has plummeted over the past couple of decades. This applies to both traditional pensions and 401(k) plans. Retirement benefits are still considered “very important” or “extremely important” by three-quarters of those surveyed, but fewer than half rank retirement benefits as one of the two most important benefits. That compares to nearly 90 percent who did so in 1999.

I’m really not sure what to make of this. Is it because Americans have given up on retirement plans they think are too cheap to make much difference? Do lots of Americans not plan to retire, for either good or bad reasons? Do they think Social Security will be sufficient? None of these explanations makes much sense. But what does? 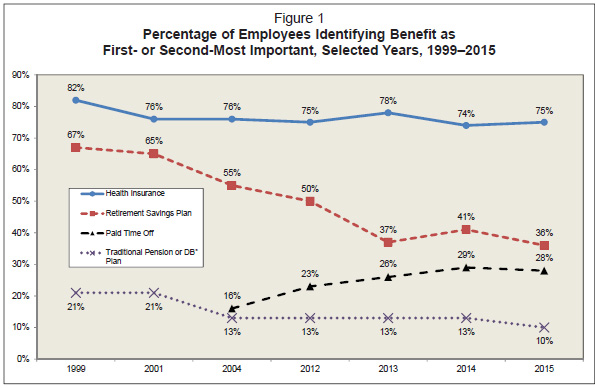