A few days ago, like an evil mastermind on 24, Donald Trump declared that if we wanted to fight terrorists we needed to target their families for death. Today he gave a speech to the Republican Jewish Coalition and told the crowd, “You’re not going to support me because I don’t want your money.” Ha ha. Stupid money-grubbing Jews. As Judd Legum pointed out, this means that 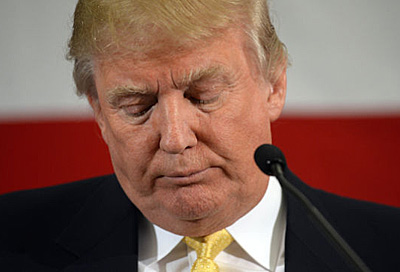 I’m now going to double down on my belief that Trump is running the world’s greatest reality show here. I think he got bored one day and came up with an idea that tickled him: “I wonder just how deranged you can get and still retain the support of the tea party wingnuts?” So he made a $1 bet with some of his Democratic friends and performed a test run in 2012 with his maniacal birther stuff. But all that did was show the depth of his challenge. He’d have to do a lot more than that in 2016. He started off slow with wild claims about immigrant Mexican rapists, knowing it would draw in the rubes. Then he laughably claimed that he’d get Mexico to pay for a border wall. Nothing happened. He insulted John McCain for being a POW. Nothing happened. He started telling obvious lies. Nothing. He lied on national TV and was called on it a few minutes later. Nothing. He all but admitted that he knows diddly about the Bible. Nothing. He called evangelical darling Ben Carson a nutcase liar. Nothing. He claimed that thousands of Muslims in Jersey City celebrated 9/11. Nothing. He mocked a disabled reporter in front of the cameras. Nothing. He suggested taking out terrorist families. Nothing. He appeared on the radio show of a crackpot conspiracy theorist. Nothing. Now he’s insulted an audience of conservative Jews.

Trump is probably frustrated. He’s basically dialed it up to 11 already, and the crowds are still swooning. What does he have to do? Tell a story about how he was abducted by aliens back in the ’90s? Promise to nuke Tehran if he’s elected president? Suggest the world would be a better place if we’d never invented any HIV treatments?

Even Trump must be scratching his head wondering what to do next. There’s gotta be something that finally goes too far. Right?