There are those who contend that it does not benefit African Americans to get them into the University of Texas, where they do not do well, as opposed to having them go to a less-advanced school, 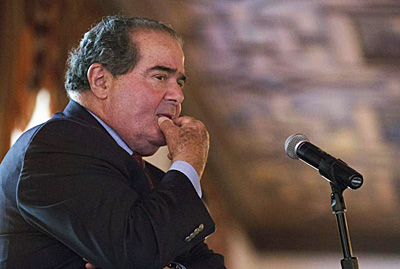 a slower-track school where they do well.

As many people have pointed out, what Scalia was haltingly trying to describe is “mismatch theory.” I’ll let a conservative explain this:

The argument is that students who are (1) not up to a college’s usual admissions standards and (2) nonetheless admitted for reasons wholly unrelated to their academic backgrounds are less likely to have good educational outcomes than if they had gone to a college for which they were more properly prepared and qualified. It’s not a new argument.

No indeed. In fact, several amicus briefs were filed making exactly this argument.

When I first read about Scalia’s remarks, I wasn’t surprised that he had brought this up. There’s considerable debate about mismatch theory, but it’s a respectable argument. What I was surprised about is the way he brought it up. Scalia had read the briefs. He has a famously keen mind. And yet, he sputtered and searched for words, and eventually described mismatch theory in the crudest, most insulting way possible.

I don’t think that was deliberate. I think he was just having trouble searching his brain for the right words. He’s also seems even more prone to outbursts of temper than usual lately. I wonder if Scalia is still as sharp as he used to be?