“It’s a depressing thing when you have to evaluate candidates’ wins and losses by weighing the relative effectiveness of their lies….And the moderators, naturally, did no fact-checking of any kind. The result was a debate that probably left viewers less informed than they were coming in.”

That’s Dylan Matthews commenting on last night’s debate. As for me, all I can do is shrug these days. I expect exaggerations and spin from politicians as a matter of course, but this year is different: Republicans seem to have finally woken up to the fact that they can say literally anything they want and pay no price for it. Their audience wants to be lied to, and being needled the next day by fact checkers does them no harm.

Nonetheless, I really have to give Donald Trump special props. Back in October he brazenly denied saying that he called Marco Rubio “Mark Zuckerberg’s personal senator” even though it was right on his own website. 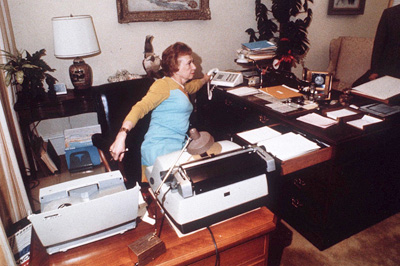 Moderator Becky Quick simply wasn’t prepared for this, and initially apologized because she didn’t have a cite for the quote right in front of her.

Now fast forward to last night and Trump does the same thing again. Neil Cavuto quotes Trump as supporting “up to 45 percent tariff on Chinese goods” and Trump interrupts him to call the New York Times a bunch of liars. He then launches into a bowl of word salad so Palinesque that it leaves Cavuto dazed and confused. “I’m sorry, you lost me,” Cavuto says, and Trump then proceeds to lose him a bit more.

For this, I give Donald Trump a special award. Not because his lies last night were any worse than anyone else’s, but because they were so cheerfully brazen. Maybe it should be a statuette of Rose Mary Woods showing reporters how the 18-minute gap could have happened. And in the future, debate moderators really need to learn to have their sources right in front of them when they ask Trump a question.