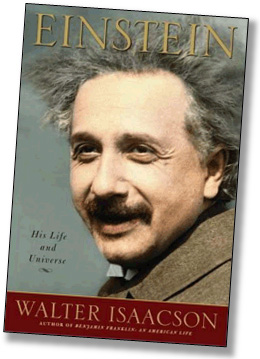 Bob Somerby is reading Walter Isaacson’s biography of Albert Einstein, which he calls “a pleasure to read.” Except for one thing: Isaacson’s description of the theory of relativity is incomprehensible. For example:

The passage shown below comes from Isaacson’s Chapter One.

The general theory of relativity…can be described by using another thought experiment. Picture what it would be like to roll a bowling ball onto the two-dimensional surface of a trampoline. Then roll some billiard balls. They move toward the bowling ball not because it exerts some mysterious attraction but because of the way it curves the trampoline fabric. Now imagine this happening in the four-dimensional fabric of space and time.

We’d have to call that passage bafflegab. No one has the slightest idea what Isaacson means when he refers to “the four-dimensional fabric of space and time.” We all can picture that trampoline—but none of us knows how to imagine that “four-dimensional fabric!” Nor does Isaacson give us the tools to do so, or notice that he has failed.

Somerby is complaining about a big problem here. But it’s not Isaacson’s fault. Or even the fault of science writers in general. It’s a defect in the universe itself.

As it turns out, explaining the “fabric” of spacetime isn’t hard. Yes, it’s four-dimensional. But all this means is that you define it using four numbers. If you described me via my age, weight, height, and IQ, that would be a “four-dimensional” representation of Kevin Drum. It’s not a big deal.

Now suppose you want to describe an event. You need to specify where it happened and when it happened. Take, for example, the airplane crashing into World Trade Center 1. It happened at 40.71º latitude, -74.01º longitude, and 6,371 kilometers (relative to the center of the earth) at 13:46:30 GMT on 11 September 2001 (relative to the common era calendar). As an event in spacetime it’s represented by an ordered 4-tuple:

There are other events that happened at the same time in other places (me saying “oh shit” in California); at the same place in other times (breaking ground on WTC 1 in 1966); and entirely different times and places (the Battle of Gettysburg). If you collect every possible location of an event ever—that is, every combination of four numbers specifying times and places in the universe—that’s all of spacetime. Physicists are likely to call it a manifold or a Minkowski space. For laymen, fabric is fine.

This is all pretty simple. You might not know the mathematics for dealing with arrays of four numbers at a time, but it’s well developed. And if you combine that with a few other concepts—like the idea that the speed of light is always constant—you’ll eventually end up with the theory of gravitational attraction that’s called general relativity.

So what’s a science writer to do? General relativity is a set of mathematical equations. Plug in the numbers and it turns out to predict the way gravity works with astonishing precision. But can someone who doesn’t understand the math picture in their head what those equations “mean”? Well, what does a Rembrandt mean to a blind person? What do derivatives mean to someone who doesn’t understand the Black-Scholes model? What does Kant mean to someone who’s never studied philosophy? You can do your best to find some kind of analogy that kinda sorta gets these ideas across, but none of them will ever be simultaneously comprehensible and truly accurate to a layman.

I said earlier that this was a defect in the universe. Here’s the defect: the universe is hard! Humans have a hard time understanding it if they aren’t willing to study diligently. (And sometimes even if they are.) There’s really no way around this. In the case of science, there’s no law that says the universe has to work in ways that the overclocked ape h. sapiens can make intuitive or visual sense of. You can read an article in Discover and get a glimpse. A really talented writer can give you a slightly better glimpse. If you get a PhD in physics you’ll get an even better glimpse. You’ll start to grasp simultaneity, light cones, stress-energy tensors, geodesics, world lines, Riemannian geometries, and frame dragging. But will you ever truly understand? Will you ever truly be able to picture it? Probably not. You might eventually be able to manipulate the algebra deftly, but at a visceral level our brains evolved to understand spear throwing and baby raising, not differential equations or tensor analysis. Welcome to the universe, you allegedly sentient being, you.

Next: In part 2, I explain general relativity so you can understand it. No joke. It’s not that hard at all! Though I admit that I’m going to cheat.