Most of last night’s debate was pretty familiar territory. But toward the end, Hillary Clinton unleashed a brand new attack:

Today Senator Sanders said that President Obama failed the presidential leadership test….In the past he has called him weak. He has called 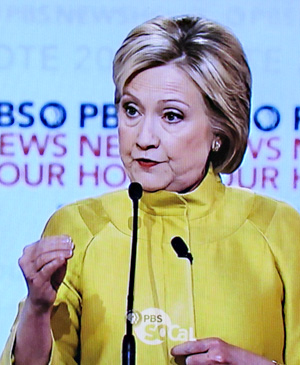 him a disappointment. He wrote a forward for a book that basically argued voters should have buyers’ remorse when it comes to President Obama’s leadership and legacy.

….The kind of criticism that we’ve heard from Senator Sanders about our president I expect from Republicans….What I am concerned about is not disagreement on issues, saying that this is what I would rather do, I don’t agree with the president on that. Calling the president weak, calling him a disappointment, calling several times that he should have a primary opponent when he ran for re-election in 2012, you know, I think that goes further than saying we have our disagreements.

….I understand we can disagree on the path forward. But those kinds of personal assessments and charges are ones that I find particularly troubling.

The problem Sanders has here is that this is a pretty righteous attack. Back in 2011 he really did say, “I think there are millions of Americans who are deeply disappointed in the president…who cannot believe how weak he has been, for whatever reason, in negotiating with Republicans and there’s deep disappointment.” And he really did push the idea of a primary challenger to Obama. And he really did write a blurb for Buyer’s Remorse: How Obama let Progressives Down. So there’s not much he can do about this attack except sound offended and insist that everyone has a right to criticize the president.

But will it work? It was actually the only hit last night that struck me as genuinely effective. Obama still has a lot of fans who are probably surprised to hear that Sanders has been so tough on their guy. If Hillary Clinton keeps up this line, it might be pretty damaging.