From David French, complaining about Donald Trump’s rather gleeful lack of policy knowledge:

When a politician claims he’ll fix the budget by eliminating “waste, fraud, and abuse,” he’s appealing to don’t know/don’t cares.

Sure, and Trump is more brazen and more stupid about this than most. But come on. Conservative politicians have been railing about the immense cost of waste, fraud, and abuse for decades. They do it because (a) it’s a good applause line, (b) its size is nice and vague, and (c) they’re afraid to propose major cuts to the big programs people actually care about (Social Security, Medicare, defense, etc.).

During this time, the conservative intelligentsia has happily gone along with this charade. Now Trump is using it to great effect, and apparently 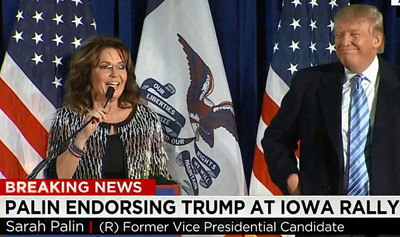 the blame for this lies with lazy voters:

The problem comes, however, when — during an election cycle — voters don’t even try. They ignore their responsibilities as citizens and become content with ignorance, happy to shortcut real evaluations with a number tried-and-true tricks. The identity of the speaker matters more than the content of the speech (We tune out the “establishment” or the “media” or “pundits.”) The tone matters more than substance (I’m not sure about Trump’s math, but he sure sounds presidential.) And narrative hovers over everything.

It’s hard for a democracy to thrive without good leaders, but it can’t survive without good voters. And if you watch a debate without the slightest clue (or perhaps even concern) as to who’s telling the truth, you’re simply not doing your job.

Donald Trump is so brain-dead ignorant that it beggars the imagination. But for decades conservatives have been training their followers to wallow in ignorance, tune out the media, and pay more attention to narrative than to basic arithmetic. And they’ve happily embraced the public faces of that ignorance, people like Rush Limbaugh, Sarah Palin, Glenn Beck, and Matt Drudge.

The old WFA con has been part of this all along. But now the conservative movement’s leaders are complaining that the rubes didn’t realize all along that it was just a bit of cynical rabble-rousing never meant to be taken seriously? Give me a break.

POSTSCRIPT: On the bright side, props to French for endorsing the Oxford comma.