I would begin my explanation with this question: Can you tell me what Hillary Clinton does for fun? We know what Obama does for fun — golf, basketball, etc. We know, unfortunately, what Trump does for fun.

But when people talk about Clinton, they tend to talk of her exclusively in professional terms….Clinton’s career appears, from the outside, to be all consuming. Her husband is her co-politician. Her daughter works at the Clinton Foundation. Her friendships appear 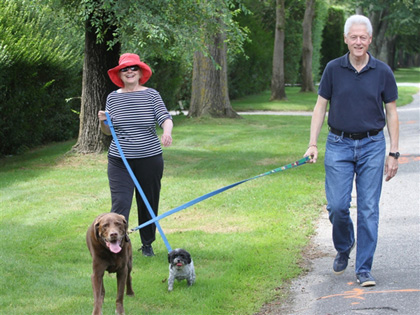 to have been formed at networking gatherings reserved for the extremely successful.

Brooks has been mocked extensively for this, but that’s unfair. He has a point here.

Before I get to that, though, let’s insert the obvious caveat: one of the main reasons Hillary is disliked is because Republicans have spent a quarter of a century attacking her character relentlessly. Benghazi is just the latest of a long string. This has done plenty of damage on its own, but it’s also caused Hillary to build a very thick shell between herself and the press. This naturally makes her seem distant and calculating.

Now let’s get back to Brooks. Here’s the thing: like it or not, from cherry trees to log cabins to men from Hope, presidents have always been as much about image as reality. In the modern era, that means presidents have a carefully constructed TV persona. JFK played touch football on the White House lawn. LBJ lassoed calves on his ranch. Nixon bowled.1 Carter went fishing. Reagan rode horses on his ranch. Bush the Elder went sailing off Kennebunkport. Bill Clinton practically focus grouped his vacations. Bush the Younger cleared brush. Obama does hits on ESPN talking about his March Madness bracket.

Apparently Hillary’s hobbies are Scrabble, gardening, and crossword puzzles. That’s not a lot to work with, but it’s something. For example, here’s a picture of Hillary and Bill in a Scrabble death match against the Bidens. Here’s another of Hillary relaxing after a long day with the New York Times crossword puzzle. And here’s one of her planting some new spring bulbs in her—

Wait. What’s that? You don’t see any pictures? Sorry about that. I couldn’t find any. Maybe I didn’t look hard enough.

Bottom line: Brooks has a point. It doesn’t matter if you think it’s fair or not. Modern presidents all know perfectly well that TV has brought the American public into their lives, and the public wants to know what they do for fun. They want to feel like their president is someone who relaxes at the end of the day and lets off a little steam. But Hillary Clinton won’t let them see that.

Sure, a lot of this is artifice. So what? It still matters.

1For all the good this did him. But at least he tried. Not for nothing did Nixon turn to media guru Roger Ailes for advice on how to appear less like the devious prick he was.