The big Donald Trump news over the holiday weekend was Stargate. This refers not to the TV show, but to the Star of David on top of a pile of money that he retweeted to symbolize how corrupt Hillary Clinton is. At first glance, retweeting this anti-Semitic trope seemed like it was probably due to the fact that Trump’s inner circle is almost 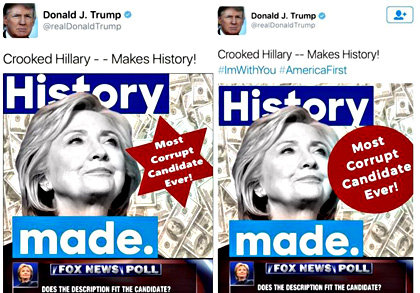 exclusively a bunch of white men who just didn’t notice that this might be offensive. In other words, dumb and insular, but not malevolent.

Except for a couple of things. First: Trump deleted the tweet within a few minutes and photoshopped a circle on top of the star. Then he went on offense, claiming that the star was really a sheriff’s star, not a Star of David. This prompted an entire Twitter meme (sample: “I was born a conservative sheriff, but my folks converted to reformed sheriff when I was 12”) but also a serious question: If it was really a sheriff’s star, why delete the tweet?

Second and more important: Trump didn’t create this graphic himself. He retweeted it from the account of an obvious white supremacist who plainly meant this to be a Star of David. Was this just a mistake? Did Trump have no idea who this guy was? Perhaps. And yet, why was he—or someone on his staff—following this account in the first place? And why does this “mistake” seem to happen so often? This is hardly the first time Trump has retweeted something from a white supremacist. Here are Ben Kharakh and Dan Primack a couple of months ago in Fortune:

In late January, Donald Trump did something that would have sunk almost any other presidential campaign: He retweeted an anonymous Nazi sympathizer and white supremacist who goes by the not-so-subtle handle @WhiteGenocideTM. Trump neither explained nor apologized for the retweet and then, three weeks later, he did it again. This subsequent retweet was quickly deleted, but just two days later Trump retweeted a different user named @EustaceFash, whose Twitter header image at the time also included the term “white genocide.”

…It is possible that Trump?who, according to the campaign, does almost all of his own tweeting?is unfamiliar with the term “white genocide” and doesn’t do even basic vetting of those whose tweets he amplifies to his seven million followers. But the reality is that there are dozens of tweets mentioning @realDonaldTrump each minute, and he has an uncanny ability to surface ones that come from accounts that proudly proclaim their white supremacist leanings.

Kharakh and Primack wanted a more quantitative analysis of this, so they hired a firm to perform a network analysis. They identified the 50 most influential “white genocide” Twitter accounts and then looked at Trump’s tweets. Here’s what they found:

But the relationship isn’t limited to retweets. For example, Trump national campaign spokesperson Katrina Pierson (who is black), follows the most influential #WhiteGenocide account, @Genophilia, which is best known for helping to launch a Star Wars boycott after it became known that the new film’s lead character was black. (Below are some recent #WhiteGenocide tweets from @Genophilia.)

…Fortune also used Little Bird software to analyze the top 50 influencers of the Trump campaign slogan #MakeAmericaGreatAgain, and found that 43 of them each follow at least 100 members of the #WhiteGenocide network.

This could be just a coincidence. White supremacists love Trump, and Trump just accidentally happens to retweet a lot of their stuff. Unfortunately for Trump, you’d have to be an idiot to believe that, and he’s running out of idiots. Even Republicans weren’t trying to defend him over the weekend. Paul Ryan just sighed: “I really believe he’s gotta clean up the way his new media works,” he said diplomatically.

But Trump runs his new media himself. It’s one of his biggest claims to fame. To clean it up, he needs to clean himself up. And he shows no signs of being willing to do that.