A few months ago the FCC—or its three Democratic commissioners, anyway—proposed doing away with set-top boxes. They’re basically a rip-off, doing next to nothing in return for a monthly rental that lasts forever. The FCC’s proposal was for cable companies to make all programming information available in a standard format, so anyone could use it. You could replace your cable company’s box with Roku or Apple TV or an app or just buy a box from someone else.

The cable companies all went ballistic, of course, and now the FCC is backing down in the face of an alternative proposal from the cable industry. The proposal itself 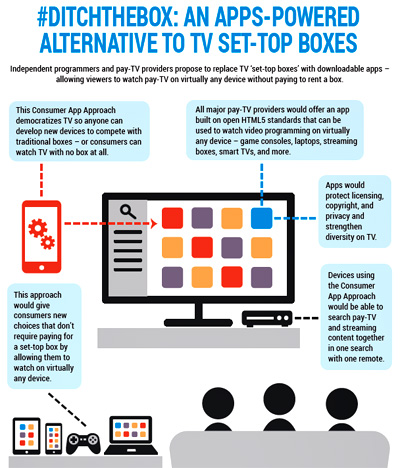 isn’t too bad—it relies on “Consumer Apps” downloaded from the cable companies—but the question is whether the industry is serious about it. The Register’s Kieren McCarthy is pretty skeptical:

The cable industry’s first target will be to ensure nothing is agreed for six months until after the presidential elections in November. Tom Wheeler’s term as FCC chair doesn’t officially end until 2018 but traditionally, the FCC chair steps down when a new president comes into office.

Adding to that, and helping to explain her sudden dislike of the cable box plan she voted in favor of, Jessica Rosenworcel’s term officially ends this week — 30 June 2016. Even though she has been approved for a second term by President Obama, Congress is dragging out her confirmation in an effort to force Wheeler to resign early. If he resigns, Senate Republicans have said, they will confirm her. Wheeler so far is refusing to blink.

If the Senate doesn’t approve Rosenworcel by the end of the year — December 31, 2016 — she has to leave the FCC: a casualty in partisan warfare fed by cable company dollars.

With the FCC taking on the cable industry in so many other ways — net neutrality rules and data privacy rules being just two — it looks as though the regulator has bitten off more than it can chew with its cable box plan.

It was a good idea while it lasted. Unfortunately, Republicans, as usual, are inexplicably opposed to any regulation that increases competition in the TV world. It’s unclear why they so consistently take the side of a monopolistic industry hated by consumers, but there you have it.