David Atkins is unhappy about a Politico story suggesting that “top Senate Democrats” are pushing Hillary Clinton to stick with Supreme Court nominee Merrick Garland if she wins in November, rather than replacing him with someone more liberal:

It seems increasingly likely that Clinton’s hands will be tied by the Obama Administration’s decision to nominate a centrist in Merrick Garland in the hopes of compromise with the current GOP. Democratic Senators are already pushing for Clinton not to displace 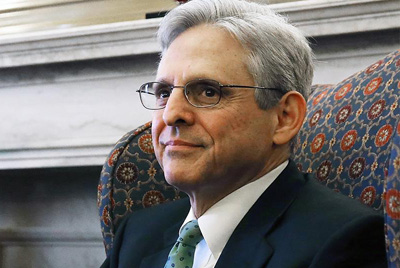 Garland with a more liberal choice in the interest of “preserving political capital.”

….“Top Senate Democrats” never seem to learn their lesson about political capital and negotiating with Republicans in Congress. There is no amount of compromising or bending over backwards that will please Senate Republicans or even make them more willing to negotiate with Democrats over other key items. One of the more glaring falsehoods of the Democratic primary campaign was that Clinton would be able to make more effective deals and compromises with the opposition, enabling Clinton to get things done that Sanders could not.

The reality is that Congressional Republicans won’t compromise with Clinton any more than they would have with Sanders. And they won’t be more inclined to deal in good faith with her if she nominates Garland than if she were to pull his nomination and select someone else.

With a caveat or two, I agree with this. And yet, I can’t help think that something more is going on with Garland. Think about it. For starters, why did Obama nominate Garland? Not in hopes of compromise with Republicans, I think. He’s not an idiot. Rather, he did it as a campaign ploy: a way of making Republicans look so extreme that they weren’t even willing to confirm a moderate jurist that most of them had praised earlier in his career.

But now think about this from the other side. Why would anyone have agreed to be Obama’s accomplice in this? It was obvious from the start that Republicans were going to block confirmation no matter who it was. Why go through all the trouble and paperwork and so forth for nothing more than being able to help the president make his opponents look bad?

My guess is that Garland received a promise—probably implied rather than explicit—that Democrats would stick with him if they won in November. Obama would work to get him confirmed during the lame duck session, and would recommend to Hillary Clinton that she renominate him in 2017 if necessary.

Roughly speaking, Garland is being a team player in hopes that the team will stick with him even if someone better comes along. The question, then, isn’t whether Clinton should try to appease Republicans. It’s whether she ought to reward loyalty in a guy who agreed to play a difficult and thankless role.

So should she? And if I’m right, how should Republicans play this game?