If you were a cynical observer and someone asked you what the media narrative would be during the last two weeks of the election, your answer would be simple: Tightening. With Hillary Clinton obviously way ahead and interest waning, reporters would be invested in telling everyone that the race was tightening so that they’d keep reading the news. Sportscasters do this endlessly when they’re faced with trying to keep their audience around during a blowout game.

Believe it or not, I’m not that cynical. And yet, here we are, and everyone is talking about tightening. So why am I not talking about it? Well, take a look: 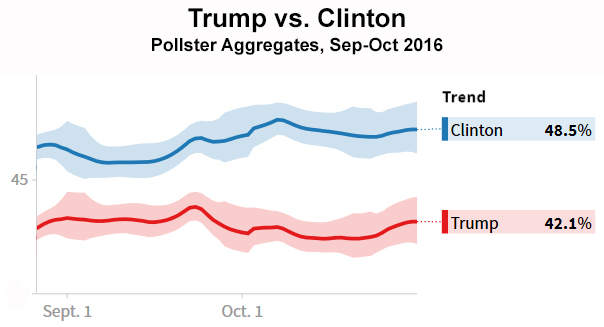 Do you see much tightening there? I don’t. Now, as it happens, there actually is a bit of tightening here, maybe half a point or so over the past week. But it’s so small it’s almost invisible even in a big chart.

Of course, this is just Pollster. Why rely solely on them? There are plenty of other poll averagers out there. The truth is that I don’t have a very good reason for this decision. I initially chose to use them because they produced nice looking graphics that I could manipulate fairly easy to show different time periods, different candidates, different polls, and so forth. Then I kept using them out of a sense that I should be consistent, rather than bopping around from site to site looking for numbers that happen to back up whatever point I wanted to make.

Of course, I could use The Upshot’s roundup of all the poll averages, and then average those. But enough’s enough. There’s a point at which you’ve squeezed all the information you can out of the lemon.

So for better or worse, I’m stuck with Pollster. In another week we’ll know how accurate they turned out to be. In the meantime, I’m not seeing much tightening there, and I’m not seeing much more anywhere else—including from Sam Wang, my longtime preferred poll averager when it comes to predictive accuracy. There’s maybe a point of tightening over the past month, maybe half a point, but that’s all. This race has been astonishingly stable for an entire year, and so far it’s staying that way.