Six years ago I read a pair of articles about Yemen which predicted that its population would double by 2035; oil revenue would decline to zero by 2017; and the capital city of Sanaa would run out of water by 2015. Today I got curious: How are those forecasts panning out?

Population: On target. Yemen’s population has increased from 23.6 million to 27.5 million since 2010—an annual growth rate of 2.58 percent. If this continues, 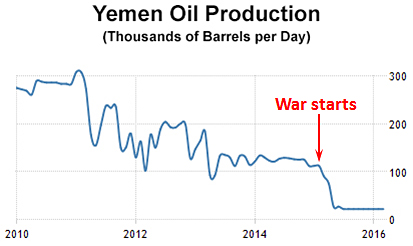 Yemen’s population will double by 2037.

Oil revenue: On target. Yemen is currently producing a meager 22,000 barrels of oil daily. In fairness, much of this is due not to pumping their fields literally dry, but to infrastructure destruction during the current civil war. They still have proven reserves of about 3 billion barrels, so production could rise again if the war ever ends.

Water: On target? Adela Jones of USC writes: “Already, Yemenis allocate up to 30% of their annual income towards water….As early as 2017, Sana’a may officially run out of water. Given consumption trends, the rest of the nation may follow.”

I remain fairly ignorant about Yemen, aside from the fact that it’s the site of a brutal proxy war between Saudi Arabia and Iran—in Saudi Arabia’s view, anyway—and we’ve been assisting the Saudis since it started. But Yemen’s future looks pretty bleak no matter who wins. What happens when they finally pump the last of the groundwater and there’s nothing left?