Holy crap. Drug testers have been hauling out old urine samples from the 2008 and 2012 Olympic Games, and the results are devastating:

More than 75 athletes from those two Olympics have been found, upon further scrutiny, to be guilty of doping violations. The majority are from Russia and other Eastern European countries. At least 40 of them won medals. Disciplinary proceedings are continuing 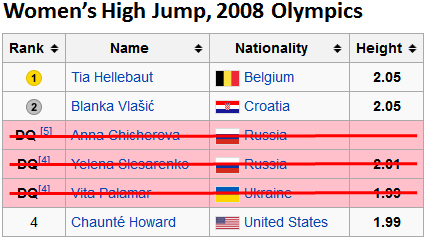 against other athletes, and the numbers are expected to climb.

….The Olympic committee announced penalties for 16 athletes last week and another 12 on Monday. Suddenly — and unceremoniously — some undecorated Olympians are inheriting medals for their performances eight years ago. Even sixth-place finishers who were far from the podium are now bronze medalists.

….Nearly all of the violations, across nationalities, were for the anabolic steroids Stanozolol or Turinabol, the very substances that notoriously fueled East Germany to global dominance in the 1970s and 80s. A rash of Turinabol violations have also recently cropped up in major and minor league baseball in the United States.

This sounds a lot like the covert help that Russia provided to Donald Trump during the election. Too bad there’s nobody around to take his medal away.