When an election is close, you can blame pretty much anything for your loss. There are dozens of people, events, and movements that can make a difference of 1 percent or so. In this election, you can blame Hillary Clinton, Berniebros, Facebook, Jill Stein, neoliberalism, the DNC, 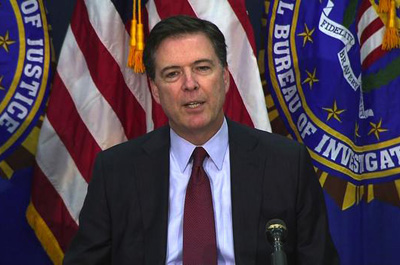 white racism, CNN, Obamacare, or anything else you want. They all deserve a share of the blame, so pick your favorite and go to town.

As for myself, I blame Emailgate. In a purely abstract way, I almost admire the ability of Republicans to elevate a self-evident molehill into a groundless smear on Hillary Clinton for the tenth or twentieth time and still get anyone to pay attention to it. It took dogged persistence and a wide cast of characters to make it happen: Trey Gowdy, Judicial Watch, Julian Assange, a rotating bench of judges, Vladimir Putin, a gullible press corps, Jason Chaffetz, the FBI, and many more. But if we’re going to choose one particular person who managed to hand the White House to a buffoonish game show host, it’s FBI director James Comey, the guy who inexplicably released a letter a week before the election that yet again implied some kind of vague, amorphous wrongdoing on the part of Hillary Clinton. Joshua Green and Sasha Issenberg report that Trump’s comeback picked up real steam only after the letter was released:

Trump’s analysts had detected this upsurge in the electorate even before FBI Director James Comey delivered his Oct. 28 letter to Congress announcing that he was reopening his investigation into Clinton’s e-mails. But the news of the investigation accelerated the shift of a largely hidden rural mass of voters toward Trump.

….After Comey, that movement of older, whiter voters became newly evident. It’s what led Trump’s campaign to broaden the electoral map in the final two weeks and send the candidate into states such as Pennsylvania, Wisconsin, and Michigan that no one else believed he could win (with the exception of liberal filmmaker Michael Moore, who deemed them “Brexit states”). Even on the eve of the election Trump’s models predicted only a 30 percent likelihood of victory.

The message Trump delivered to those voters was radically different from anything they would hear from an ordinary Republican: a bracing screed that implicated the entire global power structure—the banks, the government, the media, the guardians of secular culture—in a dark

web of moral and intellectual corruption. And Trump insisted that he alone could fix it.

I would be fascinated to know if Hillary Clinton’s data team picked up the same warning signs at about the same time.