A few days ago I posted an update on how the Republican economic revolution was going in Kansas under Gov. Sam Brownback. Answer: not so great. But that got me curious: what about other states that turned red in the great tea-party wave of 2010? Not just a little red, but all red. I’m talking about states that switched from blue or mixed to fully Republican—governor and legislature—and stayed red for the next six years. This would give tax-cut fever plenty of time to do its thing.

There were nine states that filled the bill, and then I added Louisiana even though it only stayed fully red for four years. I did this because Bobby Jindal was such an annoying loudmouth about his conservative governance, but I was fair: I counted just the four years of full redness to his record. He didn’t get any of the blame for the next two years.

Anyway, the results are below. Only three of the ten states managed to beat the national average. That whole supply-side thing might need a little work. 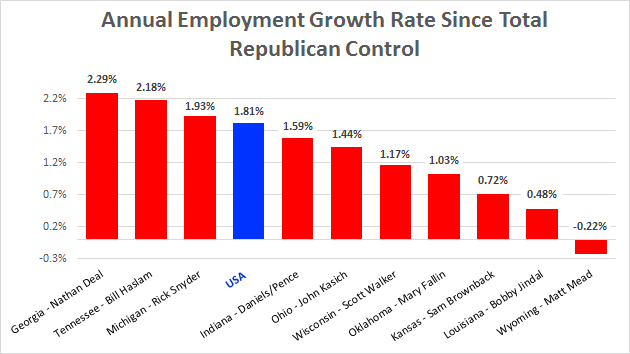