Rep. Tom Price has been dogged for weeks by allegations that he got a special deal on stock in Innate Immunotherapeutics Ltd. thanks to his status as a senior member of the House leadership (he’s chairman of the Budget Committee). Price says it’s all hooey: the deal he got was available to anyone who had invested in the company.

But now that turns out to be—what’s the word? A falsehood. You know, the deliberate kind. Here’s the Wall Street Journal:

In fact, the cabinet nominee was one of fewer than 20 U.S. investors who were invited last year to buy discounted shares of the company—an opportunity that, for Mr. Price, arose from an invitation from a company director and fellow congressmen.

The shares were discounted 12% off the traded price in mid-June only for investors who participated in a private placement arranged to raise money to complete a clinical trial. The company’s shares have tripled since the offering.

….The discounted stock offer in Innate Immuno, as the company is known, was made to all shareholders in Australia and New Zealand—but not in the U.S….[Price] said he paid the same price as other investors in the private placement but didn’t say that the 12% discount wasn’t available to ordinary investors or that he was one of a select few who were invited to participate in the deal.

This was a “friends and family” deal, which is not uncommon for small companies doing private placements. The question is, why did Price lie about it? It’s not illegal, and I don’t think it violates congressional ethics rules. So what’s going on here? Price doesn’t even work for Donald Trump yet, but apparently he’s already adopted the Trumpian habit of lying about everything even if you don’t need to. It’s good practice, I guess.

Anyway, as you can see the stock was a helluva deal for Price, rising from 29 cents (25 cents with the discount!) to $1.77 over the course of seven months. Sadly, on Friday and Monday there was a sudden selloff, and now the stock is down to 78 cents. Apparently the recent press attention has spooked a few investors. Still not a bad return for a few months’ work, though. 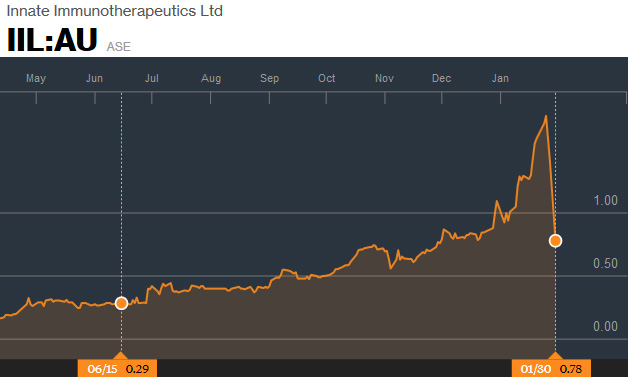