Over at Bloomberg, Noah Smith argues against getting too worked up over immigration:

Illegal immigration to the U.S. ended a decade ago and, according to the Pew Research Center, has been zero or negative since its peak in 2007….Why? One reason might be economic….The economy has improved, and the fertility rate has fallen a lot, meaning that young Mexicans are needed back in Mexico to take over family businesses and take care of aging parents….A third reason is increased border enforcement. For years, many Americans demanded that the border with Mexico be secured in order to stem illegal immigration. Presidents George W. Bush and Barack Obama did exactly that. Obama, especially, stepped up the pace of deportation.

OK. But how do Americans feel about immigration?

Here too, surveys show that there isn’t really a problem. The percent of Americans telling Gallup that immigration should be decreased went up after 9/11, spiked again during the Great Recession, but has since fallen to about a third. As of 2016, a clear majority say that immigration should either be kept at its present level (38 percent) or increased (21 percent) — hardly a mandate for immigration restriction.

Quite so. Here is Gallup’s chart of public opinion: 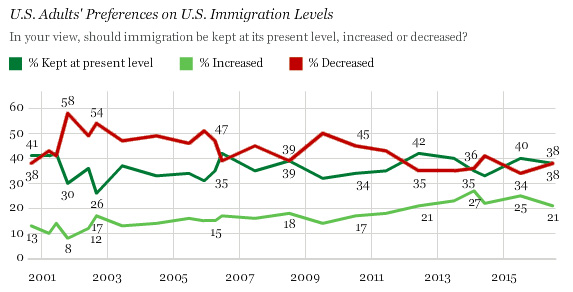 But that tells only half the story. Here are all the recent Gallup polls I could find that break out Republican responses about immigration:

Smith argues that “there is no big anti-immigrant wave in the U.S….Instead, the current anti-immigrant fervor among Trump’s hardcore supporters might simply be a brief spasm of anger by a strident minority.” But that doesn’t seem to be the case. For at least the past decade, a strong majority of Republicans has favored decreasing immigration—and if the question were limited to illegal immigration, the numbers would certainly be higher.

This is no brief spasm. The country as a whole may be getting friendlier to immigration, but Republicans decidedly aren’t. If Democrats ever want to pass some kind of comprehensive immigration reform, they’re going to have to figure out some way to get Republican votes for it, but that’s not going to happen as long as the entire GOP—not just diehard Trump fans—is dead set against it.