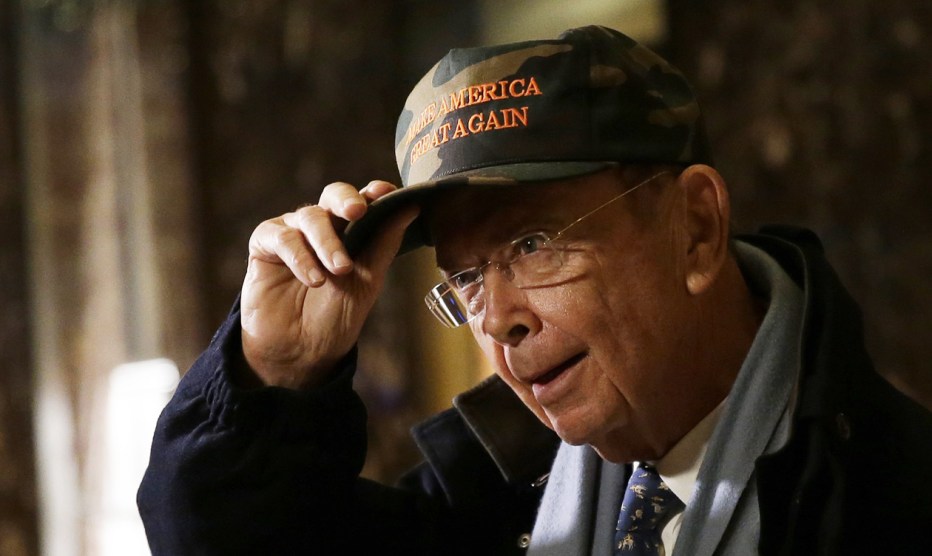 Here are some things we already know about Wilbur Ross, Donald Trump’s secretary of commerce:

Over the weekend, multiple outlets reported on a huge trove of internal documents from Appleby, a Bermuda-based law firm, that was leaked to the German newspaper Süddeutsche Zeitung and then shared with the International Consortium of Investigative Journalists. These so-called “Paradise Papers” reveal that Ross continues to own a stake in Navigator via a dizzying array of offshore accounts. Here’s the New York Times:

After becoming commerce secretary, Wilbur L. Ross Jr. retained investments in a shipping firm he once controlled that has significant business ties to a Russian oligarch subject to American sanctions and President Vladimir V. Putin’s son-in-law, according to newly disclosed documents.

The shipper, Navigator Holdings, earns millions of dollars a year transporting gas for one of its top clients, a giant Russian energy company called Sibur, whose owners include the oligarch and Mr. Putin’s family member….Mr. Ross kept an investment in Navigator, which increased its business dealings with Sibur even as the West sought to punish Russia’s energy sector over Mr. Putin’s incursions into Ukraine.

How much of Navigator does Ross own? Here’s the LA Times:

ICIJ reported that Ross and other investors own four Cayman Island entities that in turn own 31.5% of Navigator, a stake worth $176 million at Friday’s closing stock price. Ross’ stake in Navigator is likely a small fraction of that. In financial disclosure forms he filed with the government this year, Ross valued his holdings in the Cayman Island entities, which include other companies besides Navigator, at no more than $10.1 million.

Why did Ross hold onto this particular investment? It’s not like he’s seen a big payoff from it:

And anyway, didn’t Ross promise to divest himself of anything that might pose a conflict of interest? Here’s NBC News:

The documents seen by NBC News…tell a different story than the one Ross told at his confirmation. Ross divested most of his holdings, but did not reveal to the government the full details of the holdings he kept.

….Sen. Richard Blumenthal, D-Conn., said members of Congress who were part of Ross’ confirmation hearings were under the impression that Ross had divested all of his interests in Navigator. Furthermore, he said, they were unaware of Navigator’s close ties to Russia. “I am astonished and appalled because I feel misled,” said Blumenthal. “Our committee was misled, the American people were misled by the concealment of those companies.” Blumenthal said he will call for the inspector general of the Commerce Department to launch an investigation.

And what does Ross have to say about this?

Ross, through a Commerce Department spokesperson, issued a statement saying that he recuses himself as secretary from any matters regarding transoceanic shipping, and said he works closely with ethics officials in the department “to ensure the highest ethical standards.”

The statement said Ross “has been generally supportive of the Administration’s sanctions of Russian” business entities. But the statement did not address the question of whether he informed Congress or the Commerce Department that he was retaining an interest in companies that have close Russian ties.

This is…peculiar. It doesn’t appear that Ross owns a huge stake in Navigator. For a man of his wealth, the actual amount of money involved is just breadcrumbs. And it hasn’t been a great investment anyway. So why would he bother holding onto it? And in particular, why would he hold onto it but mislead Congress into thinking he had sold his stake? Especially when ties to Russia and Russian officials were under such intense scrutiny at the time?

Needless to say, the suspicion is that he held onto it for reasons other than money. But so far we don’t know anything more than that.