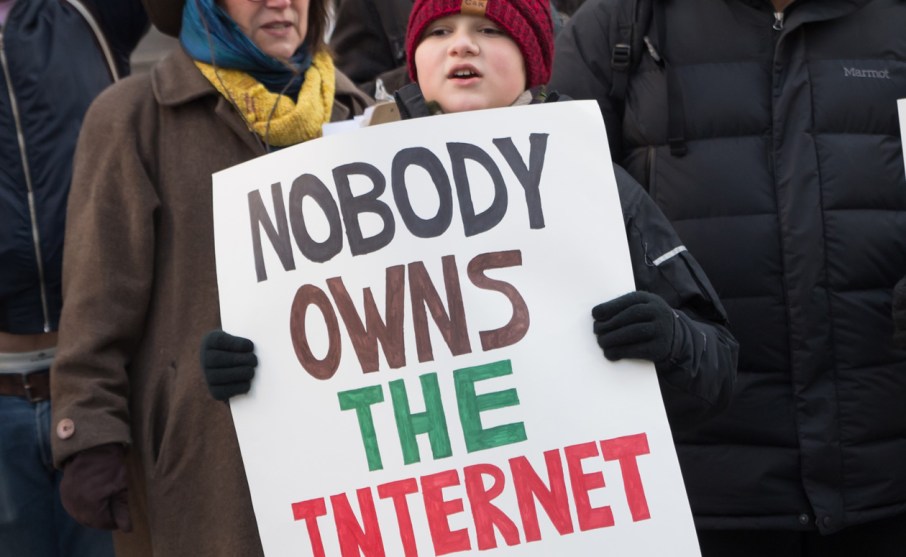 As it happens, this kid is wrong. But it's a nice thought.Patrick Gorski/NurPhoto via ZUMA

The battle to restore net neutrality received a huge boost on Wednesday when New York Gov. Andrew Cuomo signed an executive order directing state agencies to not enter into any contracts with internet service providers unless they follow net neutrality principles. The order comes just days after a similar order from Montana Gov. Steve Bullock, and makes New York the second state to enforce net neutrality protections since the Federal Communications Commission repealed it last month.

[UPDATE: I was wrong about this. They’re only requiring net neutrality for service to state agencies, not to anyone else. That makes this all but meaningless, and ISPs will be happy to do it. You can ignore the rest of this post.]

Let’s assume this is legal.¹ How much leverage does this give them?

I have no idea how to truly estimate this. But right now corporations employ about 140 million people. State governments employ 5 million people, or about 3.5 percent as many. ISPs take in annual revenues from provision of business internet services of around $30 billion. This suggests that total revenue from provision of internet services to state governments is about a billion dollars.

This is just a wild guess. It might be more if, say, public universities use a lot more internet per employee than average. Then again, not every state will do this. So call it $1-2 billion or so. New York state accounts for maybe $50-100 million of that. I suppose that maybe $20 million of that comes up for renewal each year.

These numbers seem low to me. Maybe I’m missing something. But even if they’re off by a factor of two or three, state governments just aren’t a big part of ISP revenue. So how will ISPs respond? One alternative is to simply decline to bid. Another would be to promise whatever the states want, and let them go to court if they ever decide a contract has been breached. Or maybe the whole thing collapses because there just aren’t very many ISPs to choose from who can bid for complex, statewide contracts.

In any case, if ISPs decide that fudging on net neutrality is worth more to them than $1 billion or so—which it probably is—they won’t be willing to play this game. I’m curious about how this is going to work out.

¹I don’t know enough about the competing interests at work here. Internet provision is fundamentally under the jurisdiction of the federal government and overrides state regulation. If a court decided that New York’s action was, in essence, a thinly veiled effort to undercut legitimate federal authority, it might issue an injunction. Then again, it might not. Any lawyers with the appropriate background are invited to chime in.