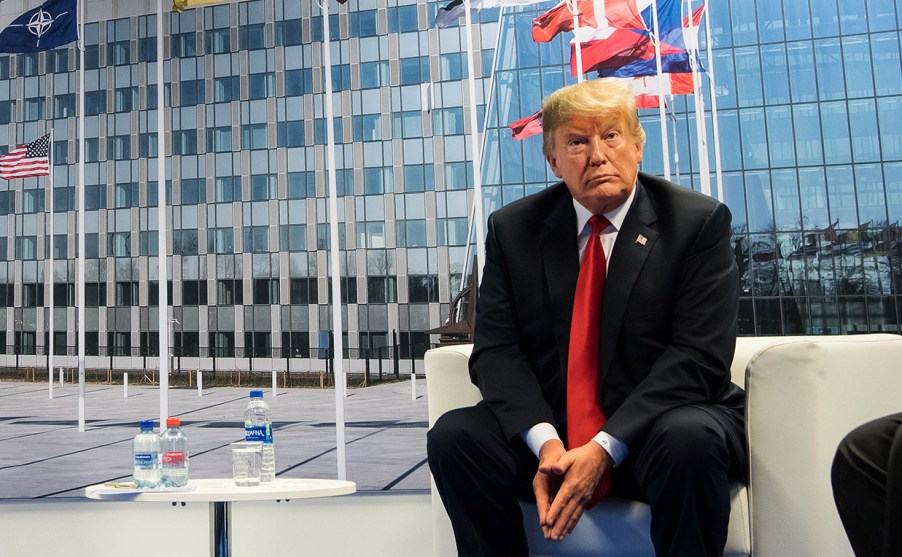 In public, Donald Trump acted like a spoiled brat during Wednesday’s NATO meeting in Brussels. But what happened when the TV cameras were turned off?

Behind closed doors, Trump was cordial and even magnanimous at times with his European counterparts, according to officials who interacted with him. And at dinner, where the leaders mingled as an acrobatic dancer performed, floating in the air, Trump said it was “a very good day at NATO.”

….During a closed-door working session of all the leaders, Trump was relatively reserved, according to attendees. He repeated the same arguments he made earlier in public that NATO member states needed to up their defense spending and that Germany is too dependent on Russia for natural gas. But he also stressed the common security threats all NATO allies face, according to a senior diplomat who was in the meeting.

….Despite Trump’s public focus on Germany’s dependence on Russian gas, he barely discussed it in his private talks with Merkel, according to an official with knowledge of the meeting. When the two leaders met face-to-face on the sidelines of the summit, Merkel defended herself and Trump did not lash out at her, the official said. Rather, their conversation focused largely on immigration, trade and Syria….Trump had a similarly nonconfrontational meeting with [Emmanuel] Macron, the European counterpart with whom he has the warmest relationship.

When is everyone going to figure out what’s going on here? “This is Trump’s strategy,” an unnamed diplomat told the Washington Post. “He raises the stakes, then he calms things down.”

No. That’s not what he does. He doesn’t have a “strategy” in the sense that normal people use the word. In private, he’s too ignorant to risk saying much of anything. In public, he has a sort of innate animal cunning about what will cause the maximum chaos and get him the most attention. This isn’t a negotiating ploy. It’s not good-cop-bad-cop. It’s not his way of eventually getting what he wants. Over and over—as this article notes—he does get much of what he wants but doubles down on the bluster anyway.

This is just Pavlovian behavior from Trump. When there’s a crowd or a TV camera around, he undergoes a phase change as reliably as water turns to ice at zero degrees. Then, when the crowds and the cameras are gone, he switches back. It’s not conscious and it’s not strategic. It just is.

None of the words he says in public mean anything. They’re just phonemes that are somehow generated in Trump’s limbic system and proceed directly to his vocal cords. Everyone needs to stop taking them seriously.