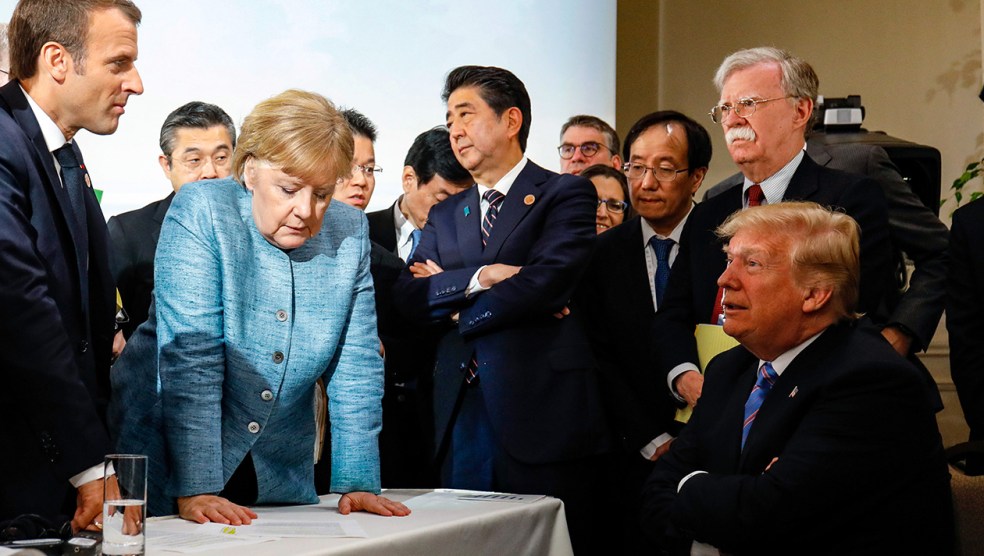 This is even better than the orginal G7 picture that made the rounds in August. Check out Shinzo Abe. This is an all-time classic eye roll.Pignatelli/Euc/Ropi via ZUMA

Remember when Donald Trump got pissed off and decided to pull out of the G7 communique? Well, um, BuzzFeed reports that it never happened:

“The White House and State Dept. are actively ignoring the tweets of the president,” one of the sources said. “It’s like there’s a reality TV president, in his own bubble, thinking he controls stuff. It’s like The Truman Show.” Trump’s tweet, the source explained, wasn’t sufficient to pull out of the communique itself because “the G7 has a suite of diplomatic tools for communications, and Twitter isn’t one of them.” The lack of a formal US notification means the G7 communique remains intact as agreed by the seven leaders in Quebec, the source added.

This G-7 story isn’t the first example we’ve seen of U.S. officials choosing to disregard Donald Trump’s orders….It’s an alarming dynamic, of course, because our system of government isn’t supposed to work this way, but it’s nearly as troubling that Trump doesn’t seem to notice. He seems to make official declarations, assuming his orders will be followed, but he fails to do any follow up.

Right. There are two things about this: