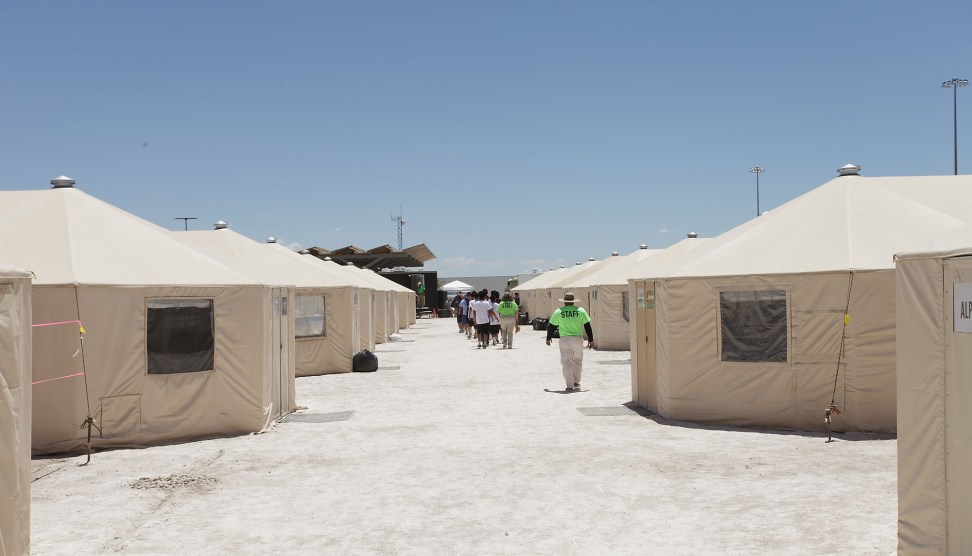 An HHS tent city for immigrant children in Tornillo, Texas.U.S. Department of Health and Human Services/ZUMA

Yesterday I wondered aloud why Wayfair employees objected to Wayfair selling beds to the government for use in immigrant detention facilities. I got many answers, none of them even remotely on point, which makes me think the real answer is that lots of people don’t actually understand what’s happening. Here’s a quick review.

Back in 2018, President Trump instituted a “zero tolerance” policy for border prosecutions that had the effect of taking children away from their parents. However, that policy ended after a few weeks when a court ordered it halted. Since then, the number of separations has been small—though not zero, for reasons that are a little unclear.

So there are some number of children in federal custody who have been separated from their parents. The number of them who are in detention facilities (as opposed to being placed in homes) is smaller yet, but again, the actual number is fuzzy. Maybe a thousand? A few hundred? I don’t know, and it’s not clear if anyone knows.

However, the vast majority of the children in custody are unaccompanied minors. Mostly these are teenagers who arrive at the border alone, while some are teens or younger children who arrive with other asylum seekers who are not their parents. Right now this amounts to 10-15,000 children, by far the bulk of immigrant children in federal custody.

But here’s the key issue: these children are not supposed to be in the custody of the Border Patrol at all. Within 72 hours they’re supposed to be transferred to the Department of Health and Human Services—and most of them are. But some of them stay in CBP facilities for days or weeks, and the conditions in these facilities are horrible.

So there are several things in play here:

There’s no question that the huge spike in asylum seekers has caused a crisis within the Border Patrol and, to a lesser extent, HHS. They simply aren’t set up to deal with the kinds of numbers they’ve been handling over the past few months. Right now they’re scrambling to improve conditions in their facilities, and that includes things like buying tents and food and beds and so forth. This is perfectly sensible, and there’s no reason any company should have qualms about selling stuff on a normal, commercial basis to help CBP and HHS in this effort.

POSTSCRIPT: None of this has anything to do with ICE facilities, which are for immigrants arrested by ICE within the United States. That’s a whole different can of worms.