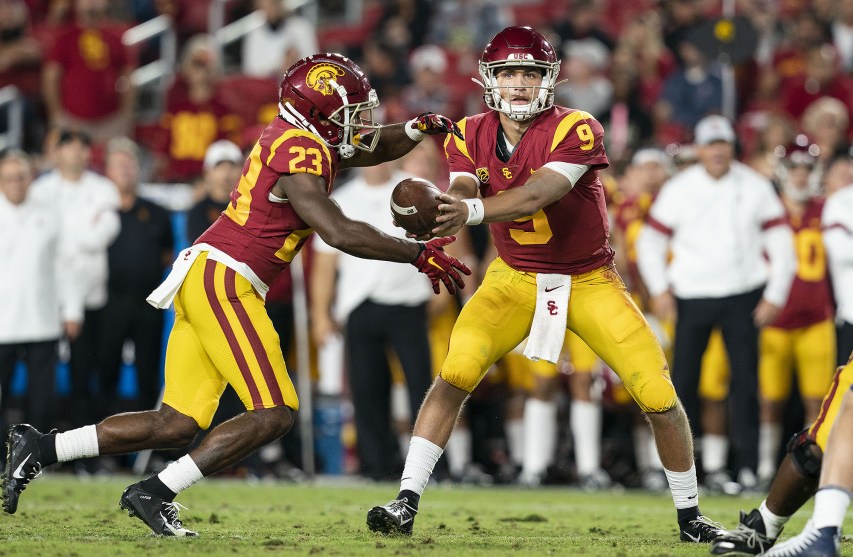 USC freshman quarterback Kedon Slovis hands the ball off to running back Kenan Christon in a thriller against an outmatched Arizona squad.Jon Endow/Image of Sports/Newscom via ZUMA

Here’s a timeline of recent actions in the college sports arena:

September 11: The NCAA Board of Governors wants California Gov. Gavin Newsom to reject a new attempt to pay college athletes….In a six-paragraph letter released Wednesday, the board urged Newsom not to sign the legislation known as the Fair Pay to Play Act, which would allow college athletes to be paid for the use of their names, likenesses and images….The board warned that California schools may be declared ineligible for NCAA competition if the bill becomes law because they would have an unfair recruiting advantage.

September 30: California became the first state to require major financial reforms in college athletics on Monday after Gov. Gavin Newsom signed into law a measure that allows players to receive endorsement deals….Senate Bill 206 by Sen. Nancy Skinner (D-Berkeley) prohibits the NCAA from barring a university from competition if its athletes are compensated for the use of their name, image or likeness beginning Jan. 1, 2023.

October 29: The NCAA is finally embracing “change” and starting the process of allowing student-athletes to profit off of their name, image and likeness, the organization announced on Tuesday. The organization’s top governing board voted unanimously to allow college athletes to be compensated, though the specifics on how college athletes’ compensation will fall on each of the NCAA’s three divisions to craft their own rules.

Whaddayaknow? After five years of futzing around following the O’Bannon decision, all it took was a little nudge by California and within a few weeks the NCAA suddenly decided to cave in. How about that?