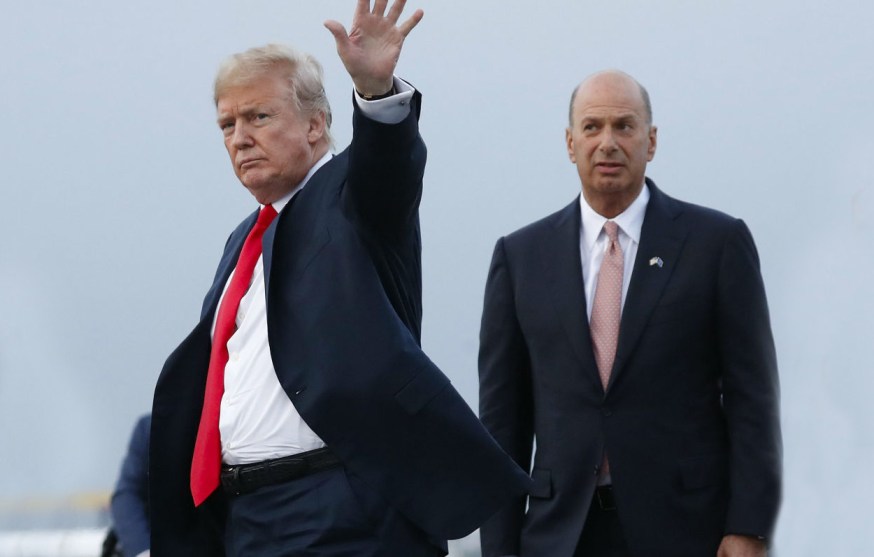 You may recall that Gordon Sondland is a key figure in the Ukrainegate scandal. Sondland is our ambassador to the EU, but he’s not a career diplomat. He was rewarded with the job because he’s a big Trump donor and loyalist.

There’s nothing wrong with that. It’s traditional for high-profile US ambassadors to be political donors. And in this case it’s good for Trump: Sondland is surely likely to put a favorable spin on things when he testifies about Ukraine in front of three House committee. In fact, his lawyer said he was eager to testify voluntarily, and he had flown back from Brussels to appear this morning.

But at the last minute his appearance was squashed by the State Department. Why? Executive privilege? Lack of time to properly prepare? Concern over the possible release of classified material? Nope:

I would love to send Ambassador Sondland, a really good man and great American, to testify, but unfortunately he would be testifying before a totally compromised kangaroo court, where Republican’s rights have been taken away, and true facts are not allowed out for the public….

That’s right: Trump has ordered Sondland not to appear before the House because he thinks the House investigation is totally unfair. That’s a new one! And one of Trump’s most loyal spear carriers in the House completely agrees:

“The way [Schiff] treated Volker last week, that treatment is the reason why the State Department and the White House said we’re not going to subject Ambassador Sondland to the same treatment,” Rep. Jim Jordan (R-Ohio), the ranking member of the House Oversight and Reform Committee, told reporters.

“Ambassador Volker was not giving them the answers that they were leading Ambassador Volker to conclude,” said Rep. Mark Meadows (R-N.C.), another of the president’s allies on Capitol Hill. “This president did not hold aid to try to influence a foreign country to do anything.”

Actually, Volker gave them a whole lot of the answers they were looking for. Details here. Nonetheless, Sen. Lindsey Graham was also on the president’s side:

Senate Judiciary Committee Chairman Lindsey Graham (R., S.C.), one of the president’s closest allies, said on Twitter it was “time for the Senate to inquire about corruption and other improprieties involving Ukraine.” He said that he would offer Mr. Trump’s personal attorney, Rudy Giuliani, “the opportunity to come before the Senate Judiciary Committee to inform the committee of his concerns.”

Translation: Forget about Trump’s actual corruption, we should be more concerned with hearing about made-up conspiracy theories regarding Ukraine and Democrats. And who better to provide that kind of thing than Rudy Giuliani?

For the record, our ambassador to Ukraine thought it was clear that we were holding up military aid to Ukraine until they agreed to investigate Joe and Hunter Biden. This was also the understanding of Sen. Ron Johnson after he talked to Sondland. And it was certainly mighty suspicious that Trump held up the Ukraine aid and then instructed his aides to lie to Congress about why he was doing it. Still, Trump has totally denied that he did anything wrong, so that should be that. Right? Why bother investigating any further, especially in front of a committee run by Democrats who are clearly total hacks and completely unfair?

It’s too bad Democrats were unaware of this defense back in the day. It sure would have cut short a lot of unpleasantness. The next stop, I suppose, is a subpoena, which the White House will ignore and which Democrats will take to court. That should burn off several months of time and prevent any impeachment vote this year. Or so they hope.