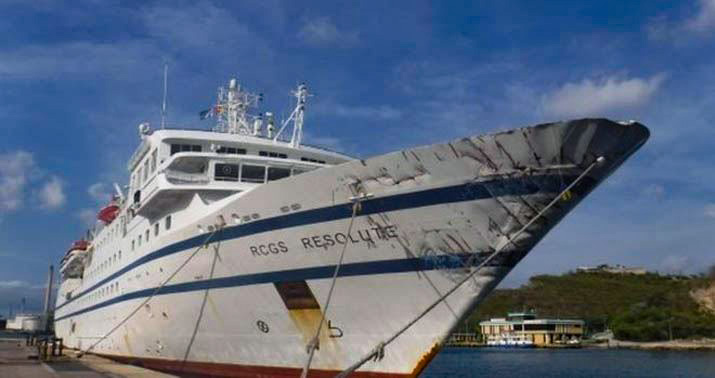 The RCGS Resolute after its encounter with a Venezuelan patrol boat.Columbia Cruise Services

Nobody dies in this story, so you might find it an amusing start to the day. It begins early Monday morning, when the cruise ship Resolute was idling in international waters off the coast of Venezuela while performing engine maintenance:

Shortly after midnight, the cruise vessel was approached by an armed Venezuelan navy vessel, which via radio questioning the intentions of the RCGS RESOLUTE’s presence and gave the order to follow to Puerto Moreno on Isla De Margarita. As the RCGS RESOLUTE was sailing in international waters at that time, the Master wanted to reconfirm this particular request resulting into a serious deviation from the scheduled vessel’s route with the company DPA.

While the Master was in contact with the head office, gun shots were fired and, shortly thereafter, the navy vessel approached the starboard side at speed with an angle of 135° and purposely collided with the RCGS RESOLUTE. The navy vessel continued to ram the starboard bow in an apparent attempt to turn the ship’s head towards Venezuelan territorial waters.

Unfortunately for the Venezuelans, the Resolute is an Antarctic cruise ship fitted out as an icebreaker. It sustained no serious damage from being rammed on its bow.

The Venezuelan patrol boat was not so lucky. It sank.

Have a nice weekend, everyone.